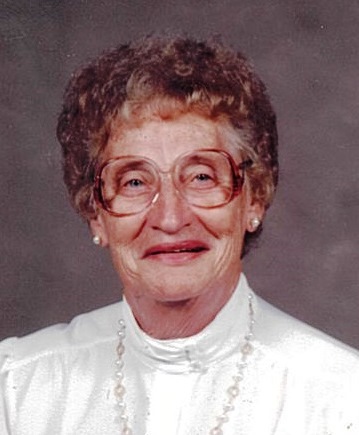 Grace G. Vander Heiden, age 97, of Kimberly passed away on August 15, 2018 at Parkside Senior Living in Neenah. Grace was born on September 02, 1920 to Jacob and Catherine (Peeters) Gerrits in Kaukauna and grew up on a farm in Black Creek before moving to Appleton. She married John “Jack” Vander Heiden on May 25, 1940 and lived in Kimberly on Joseph St. for 60 years.

Grace was a loving wife, mother, grandmother and great grandmother. She never forgot a birthday, and consistently sent cards to everyone. For many years her large family gathered at her house each Easter, Thanksgiving and Christmas to enjoy her company. Everyone relished her pumpkin, cherry and apple pies. She was a great canner, and her family enjoyed her strawberry jam for many years.

She was a dedicated seamstress and knitter. She made hundreds of pairs of slippers, sweaters, scarves, hats and mittens that kept her family warm in the winter. She was a card shark, and loved to play cribbage, sheepshead, kings corners and bingo. She was a card counter, although she would never admit to it.

In their younger years, Grace and Jack were square dancers and bowlers, collecting numerous trophies that stood proudly on the shelves of their basement bar. She found special meaning working as a crossing guard in Kimberly – where she enjoyed helping kids to and from school every day. In addition, Grace was a member of the Darboy Post 265 of the American Legion Auxiliary, Ladies of Holy Spirit-Kimberly, Kimberly Golden Agers, and the Kimberly Recreation Association.

Her family wishes to thank Tiffany and all the staff at Parkside Sr. Living-Neenah, Tammy from Asera Care Hospice, Kevin from Lakeland Care, Sharon Sonnleitner, and Dr. Montgomery Elmer for all of their care given to our mother.