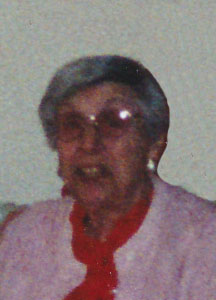 Grace was born on February 7, 1921 in Seymour to Oscar and Tressie (Krause) Beil. She married Joseph Heigl in February 1947 at St. Therese Catholic Church. Grace had worked at Kimberly Clark and St. Elizabeth Hospital for a while. She liked spending time with people and enjoyed going out for fish, shopping and loved to play bingo. Grace always had a large garden and was always sharing what she grew. She was a member of St. Joseph's Catholic Church and the TOPS club.

The funeral liturgy will be held on Thursday, November 10, 2011 at 10:30 AM at ST. JOSEPH CATHOLIC CHURCH (410 W. Lawrence St., Appleton) with Fr. Jim Leary, OFM. CAP. officiating. A time of visitation will be held on Thursday, November 10, 2011 from 9:30 AM until the time of services at the church. A memorial will be established in her name. The family would like to extend their thanks for everything Appleton Retirement Center and Appleton Health Care Center did for Grace.