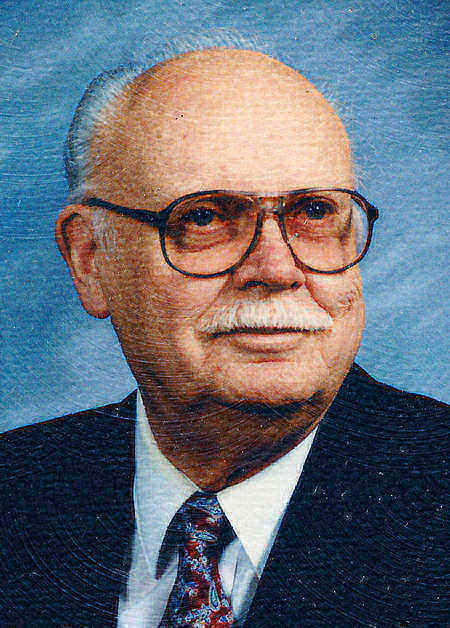 Gordon E. Handrich, age 87, of Appleton, passed away at Brewster Village, Appleton, on May 28, 2011. Gordon was born on May 12, 1924, in Royalton, Wisconsin, to the late Otto and Emma (Pelzer) Handrich. He graduated from Manawa High School in 1942 and was employed at 4 Wheel Drive in Clintonville and Ferg Electric until entering the United States Army. Gordon proudly served his nation as a Staff Sergeant at Camp Beale in California. He married the former Dorothy Loughrin on July 19, 1948, at St. Patrick's Catholic Church in Lebanon, Wisconsin; she preceded him in death on December 28, 1992. Gordon was employed at Aid Association for Lutherans in Appleton for over 42 years. He was proud to be an Officer and for his work establishing the Members Relations Department. In 1962 Gordon was a charter member of Good Shepherd Lutheran Church. He was the congregation's first treasurer, second president and for many years served on the Finance Committee. Gordon enjoyed fishing, bowling, hunting, gardening, bird watching, traveling and photography. He followed the Braves, then the Brewers, and the Packers. After his retirement, Gordon actively volunteered at the Houdini Museum, the Bubolz Nature Center and the Grignon Mansion. He was well known for his sense of humor and sense of fun. Survivors include his children, Steve (Peggy) Handrich, Madison, Wisconsin, and Denise Handrich, Snowmass, Colorado; his dear friend and companion, Nancy Barker, Menasha; his sisters, Viola Olson, Appleton and Mabel Chich and Rosie Tessen of Manawa. Gordon was survived by numerous nieces and nephews, including Shirley (Don) Mertes, Rothschild; Kay (Greg) Lockhart, Appleton; and Gary (Joyce) Chich, Iola. He was preceded in death by his brother Elmer Handrich. Funeral services will be at 11:00 a.m. on Wednesday, June 1, 2011, at GOOD SHEPHERD LUTHERAN CHURCH, 2220 E. College Avenue, Appleton, with Rev. Martin Koeller and Rev. Timothy Seabaugh officiating. Friends may call directly at the church on Wednesday from 9:30 a.m. until the time of services. Military Honors will follow the funeral services at church. Interment will be in the Wisconsin Veterans Cemetery in King, Wisconsin.
Wichmann Funeral Home
537 N. Superior Street
Appleton 920-739-1231
Online Condolences
www.wichmannfargo.com