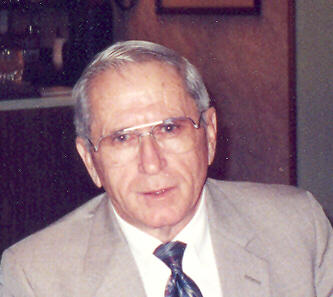 Glenn W.J. Thompson, age 82, passed away Thursday, October 1, 2009 at Brewster Village in Appleton. He was born on April 22, 1927 in Appleton; son of the late Charles and Leone “Lee” (Storm) Thompson. On June 10, 1950, he was united in marriage to Delores Dorschner at St. Joseph Catholic Church in Appleton. Glenn left Appleton West H.S. at age 1 7 to serve his country with the U.S. Navy from 1944 to 1946. In 2001, he was issued his high school diploma from the Appleton Board of Education as well as a commendation for serving his country. Glenn worked for Riverside Paper for 42 years, where he also served as a union president and retired in 1989. He served as an Alderman for 16 years and a County Supervisor for an additional 16 years, he also ran for mayor and state assembly and was a kindergarten grandpa at Clovis Grove School. Glenn is survived by his wife, Delores Thompson, Appleton; son, Charles (Linda) Thompson, Menasha; daughter, Kathy (Steve) Buss, Shiocton; grandchildren, Jessica (Adam) Vishy, Hazelwood, MO, Matt Thompson, New York, NY, Andy Buss, Waterloo, NY and Eric Buss, Shiocton; sister, Jean Santkuyl; brothers, Jack (Cleo) Thompson, Bob (Barbara) Thompson and Guy (Erma) Thompson; sisters and brothers in law, Jackie Draheim, Shirley (Marlin) Brown, Darrell Dorschner, Sarah (Paul) Laubenstein, Terry (Mary) Dorschner and Sandy (Ken) Carew. Glenn was preceded in death by his parents and brothers in law, Joe Santkuyl and Bob Draheim. A Mass of Christian Burial for Glenn will be held on Tuesday, October 6, 2009 at 11:30 a.m. at ST. BERNADETTE CATHOLIC CHURCH, 2331 E. Lourdes Dr., Appleton with Fr. Don Zuleger officiating. Family and friends may visit at Wichmann Funeral Home Tri-County Chapel, Menasha on Monday from 3:00 to 6:00 p.m. and again on Tuesday from 10:30 a.m. until the time of the mass at church. Entombment will take place in Highland Memorial Park, Appleton.