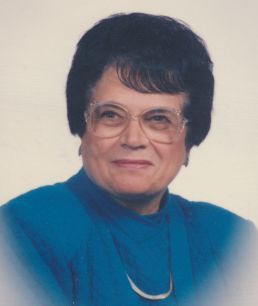 Gladys R. Andrews, age 89, of Appleton passed away on January 23, 2013 at Cherry Meadows. She was born in Kewaunee on February 3, 1923 to the late Frank and Emma (Bunker) Houdek of Appleton (formerly of Kewaunee). She graduated with the class of 1941 from Kewaunee High School where she was a cheerleader as well as the Prom Queen. Gladys married Douglas K. Andrews of Two Rivers on April 24, 1944 in Kewaunee at the parsonage of Holy Rosary Church. Doug preceded her in death on February 3, 1986.

Gladys worked at Paragon Electric in Two Rivers from 1945 to 1948 at which time they moved to Appleton. She worked at the Wisconsin Telephone Company in Appleton from 1948 to 1959. Later, she worked at Miller Electric in the Sales Department from 1976 to 1994, until her retirement on January 4, 1994.
She was a member of the Appleton Medical Center Auxiliary doing volunteer work in the gift shop and family surgical waiting room. Gladys was also a poll worker for voting and was Chief Inspector in her district for several years.

She was very proud of her granddaughter Andrea. Gladys loved to go out to eat with Andrea, as well as attend many of Andrea's school concerts and activities. Gladys enjoyed going on one day bus trips, especially “Mystery Trips”. She traveled to all of the states in her life time.
She enjoyed movies, biking, reading, ceramics, and was an avid Packer fan. She also enjoyed “going out to eat” and went to a lot of Friday night fish frys in her time. Gladys' car could often be found at a local restaurant with her personalized “OU 2 EAT” license plates.

Gladys was a charter member of St. Pius X Catholic Church in Appleton. A Funeral Liturgy will be held for Gladys on Saturday January 26, 2013 at 1:30pm at St. Pius X Catholic Church 500 West Marquette Street. Fr. Thomas J. Farrell will be officiating. She will be laid to rest at Highland Memorial Park. The family will greet friends and relatives at Wichmann Funeral Home downtown chapel beginning at 10:30am until 12:45pm on Saturday. In lieu of flowers, memorials to the American Heart Association are appreciated. Online condolences may be expressed at wichmannfargo.com.