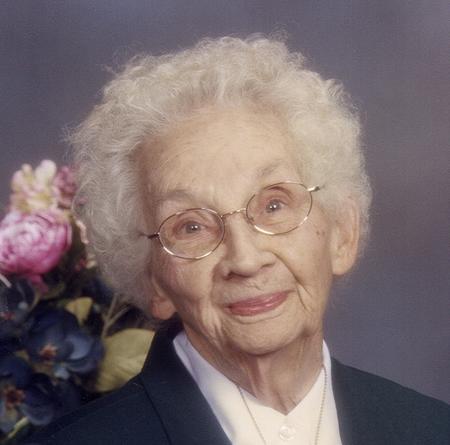 Age 91, passed away peacefully on Saturday, February 3, 2007 at her son‚Äôs home in Combined Locks. She was born on February 19, 1915 in Stockbridge to the late Edward and Lena (Scherer) Berrens. She was a loving wife to James Nemecek, Sr. and later to Leo Melchiors, they both preceded her in death. Gertrude worked for 35 years at the S.S. Kresge Company in downtown Appleton. She was a lifetime member of St. Therese Catholic Church. Gertrude thoroughly enjoyed her regular outings with her family and friends. She will be remembered as an awesome Mother and Grandmother, who enjoyed her cup and saucer collection, playing Crazy 8‚Äôs, embroidery, word searches, crossword and jigsaw puzzles.

Funeral mass for Gertrude will be held on Wednesday, February 7, 2007 at 12:00 noon at St. Therese Catholic Church (Morrison Street at Wisconsin Avenue) with Father William Hoffman officiating. Friends may call at the church from 10:00 A.M. until the time of the mass. Interment will be in St. Joseph Cemetery. In lieu of flowers, donations are appreciated in Gertrude‚Äôs name to St. Therese Catholic Church or to the Salvation Army