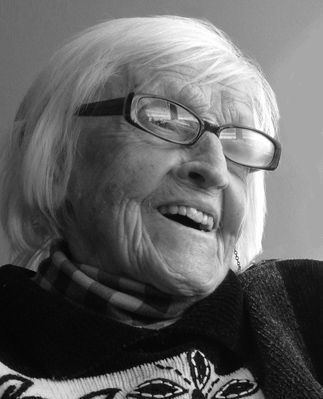 A joy and inspiration to her many friends and relatives throughout her long life, Gertrude Helen Martha Posselt Knoke (Gert) was born in Readfield, WI, on December 19, 1913, to Paul and Erna Posselt. She married Leland Leonard Knoke (Jake) in 1936 and moved to Appleton, where she lived the rest of her life. Her interests were extensive: learning, traveling, dancing, sewing, singing, curling, gardening, quilting, music, exercise, crossword puzzles, bridge, Scrabble, and more. Above all, she loved people and bringing them together—hosting gatherings for family and friends from the many groups of which she was a member. The flow through her house was all part of the rhythm of life. She was known for her beautiful yard and garden, and endless hospitality.

Gert Knoke had a certain sense of style. Her knack for repurposing manifested in many ways, not the least of which was the appearance she gave of never having worn the same thing twice. Practical nature drove her creativity, not a desire to impress.

Gert, Jake, and the kids took a long road trip throughout the western U.S. and Canada in 1951 and the eastern U.S. in 1953, when she apparently acquired her love of travel. After she lost her husband in 1958, she began working for the U.S. Census Bureau and continued as an interviewer for various research groups, including the University of Wisconsin, until 1978.

It was in 1964 that Gert really came into her own. Her daughter introduced her to the Experiment in International Living, whose mission is to bring people of different nationalities together through homestays and so engender increased cultural and international understanding. Gert became a regional host leader and through involvement with both the EIL and the American Host program, she received and placed visitors from France, South Africa, Senegal, Malagasy Republic, Germany, Holland, England, Ireland, Brazil, Iran, and Japan. Many of these experiences garnered life-long friendships and gave cause for travel to Turkey, Israel, the West Indies, Brazil, and throughout Europe.

A lifelong member of Mount Olive Lutheran Church, Gert served with Ladies Aid, Altar Guild, and the church choir, where she gave voice to her tenor range. She was active in King's Daughters, various women's clubs, bridge clubs, and the YMCA, where she practiced aquatic exercise until age 93.

Gert spent her golden years with dear friend Frans Larson … traveling, golfing, gardening, playing cards, taking in theatre, listening to music, and enjoying life. And, of course, there were the birds. She fed them religiously and fretted whenever the seed supply was running low.

Gert liked the summers hot, the soil damp, and the occasional brandy Manhattan cold. But nothing gave her greater pleasure than to have people gather at 523 N. Linwood, whether it was for Thanksgiving dinner, short-ribs on the grill, or whatever yard game was set up “out-back.” As much as she loved traveling, Gert often asserted (looking out from her perch at the kitchen window) that her favorite place to be was home.

A very special thank you to the many caregivers over the past few years: Arlene, Bob, Erica, Linda, Marcos, Millie, Mabel, Tom, the folks at the Thompson Center and many others. The wonderful staff and residents at Grand Horizons have become like family.

A celebration of Gert Knoke's life will begin with a visitation at 2:00 p.m. followed by a service at 3:00 on Saturday, October 3, 2015, at Wichmann Funeral Home, 537 North Superior Street, Appleton.