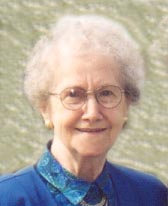 Germaine F. Lamers of Kimberly, age 94 years, died Saturday, February 18, 2006 at St. Paul Home in Kaukauna. She was born June 11, 1911, one of six children born to Ted and Jenny (Verbeten) Micke in St. Croix Falls, Wisconsin. Germaine moved to Kimberly from Cloquet, Minnesota at the age of 18 years. She met and married John Lamers on October 4, 1933 in Kimberly, and was devoted to him for over 71 years. As their children grew, John and Germaine were regular attendees at their school and sporting events.

Her greatest joy was her family and she devoted her entire life to fulfillment of the roles, wife and mother. She was active in Christian Mothers and the National Catholic Society of Foresters at Holy Name Parish. She and John were members of Holy Name Parish for 71 years and were active in the choir. In her family she will be remembered for her expertise in the kitchen; canning, baking, cooking, preserving everything that came from the garden. She loved her card playing, especially sheepshead. In their retirement years Johnny and Germaine traveled and spent time visiting children, grandchildren and great grandchildren.

The funeral liturgy for Germaine will be held at 12:00 (noon) on Tuesday, February 21, 2006 at HOLY SPIRIT PARISH, 600 E. Kimberly Avenue in Kimberly with Fr. Tom Pomeroy. Interment will be in the parish cemetery. Friends may call directly at the church on Tuesday from 10:00 am until the hour of the liturgy. In lieu of flowers, memorials to St. Scholastica Monastery in Duluth, Minnesota are appreciated.