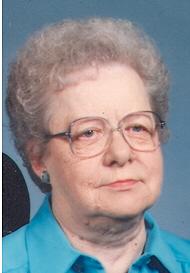 Germaine E. Kalz, beloved mother, grandmother and great grandmother, age 82, of Appleton, died Wednesday morning, September 28, 2005, at Century Oaks. Germaine was born March 18, 1923, to the late Leo and Josephine (Steber) Londo, in Antigo, grew up in Two Rivers and had been an Appleton resident for 55 years. She married Rudolph Kalz on April 22, 1950; he preceded her in death on October 14, 2004. Germaine enjoyed counted cross stitch, knitting, crocheting and was a very good cook and baker. Germaine was a longtime member of Sacred Heart Catholic Church. She will be greatly missed by two daughters, Debbie (Steve) Twomey, Phoenix, AZ; Sue (Mike) Sokel, Larsen, WI; six grandchildren, Holly, Jason (Gina), and Mike Twomey, Shane, Luke and Katherine Sokel; four great grandchildren; her devoted sister, Bern Londo, Two Rivers; two sisters-in-law, Rita Londo, Two Rivers; Lorraine Kalz, Milwaukee; a brother-in-law, Henry Kalz and his special friend, Lucy. She was preceded in death by a brother, James Londo.
The funeral liturgy for Germaine will be held at 11:00 am, Friday, September 30, 2005, at SACRED HEART CATHOLIC CHURCH, corner of Fremont and Monroe Streets, Appleton, with Father Norm Krutzik officiating. Burial will be in Appleton Highland Memorial Park. Friends may call at the church from 9:00 am Friday, until the time of the mass. A memorial fund is being established.