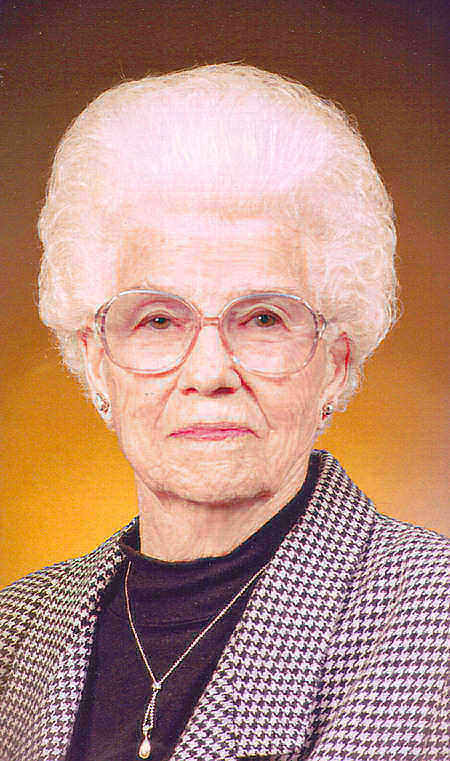 Geraldine Rose Albers, age 95, of Kimberly, passed away Friday evening, February 13, 2009 at Appleton Medical Center.
Geraldine was born October 23, 1913 in Appleton, to the late Roy and Agnes (Femal) Van Ryzan.
On February 22, 1936 Geraldine was united in marriage to Paul A. Albers at St. Mary Church, Appleton. They enjoyed 54 wonderful years together until Paul preceded her in death on March 23, 1990.
Geraldine was a faithful member at Holy Spirit Parish, Kimberly where she belonged to the Ladies of Holy Name.
She was an avid sportswoman where she played women's softball and women's basketball in her younger years. Geraldine and her husband enjoyed hunting, fishing, bowling, and golfing. After their retirement they enjoyed many years of extensive traveling to every state, except Alaska. In her later years she enjoyed watching the Badgers, the Brewers, and the Packers. Most of all she loved to attend and be active in her children, grandchildren, and great-grandchildren's sporting events.
Geraldine is survived by her three children: Thomas (Nancy) Albers, Jan (Judy) Albers, Sandy (Don) Ver Bust, all of Kimberly; eleven grandchildren: David and Mike Albers, Lynn (Don) Young, Beth (Al) Manitzki, Jeff (Kris) Albers, Sue Albers, Jill (Dave) Vanden Oever, Mark Ver Bust, Steve (Kelly) Ver Bust, Gina (Matt) Ruys, and Rick Albers; twenty-six great-grandchildren: Andrea, Emily, Kiaya, and Lucas Albers, Duke and Stephanie Young, Thomas Albers, Amie and Jacob Young, Nicole and Ryan Albers, Andrew and Tommy Ellen Albers, Michael, Katelyn, Steven, and Brett Vanden Oever, Matthew, Madison, Mason, and Maggie Ver Bust, Paige Ness, Kristin, Mitchel, Katie, and Erin Ruys; numerous nieces and nephews; and other relatives and friends.
In addition to her husband, Paul, Geraldine is preceded in death by three sisters: Gertrude, Monica, and Jean; three brothers: Roger, Mark, and John.
The funeral liturgy for Geraldine will be held 11:00 a.m. Tuesday, February 17, 2009 at HOLY SPIRIT PARISH, 600 E. Kimberly Ave., Kimberly. Fr. David Beaudry will be the officiant. A time of visitation and support will held at the church on Tuesday from 9:30 a.m. until the time of mass. Burial will take place at Holy Name Cemetery, Kimberly.
In lieu of flowers, a memorial fund has been established in Geraldine's name.

The family would like to extend a heartfelt thank you to the staff and caregivers at Appleton Medical Center and Thedacare Hospice.