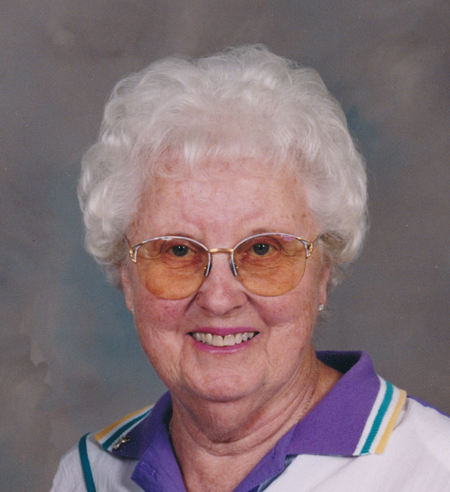 Mrs. William J. Hoffman, age 87, of Appleton, formerly of Gresham, passed away on Saturday, July 7, 2012 at Cherry Meadows. Gerrie was born on November 16, 1924, in Gresham, the daughter of the late Arthur and Mathilda “Tillie” (Weber) Schabow, Sr. She attended school in the Gresham area and was a cheerleader at Gresham High School, where she graduated in 1943. Following graduation, she and her parents moved to Appleton where she was employed by Zwicker Knitting Mills. On August 21, 1948, Gerrie married the love of her life, William J. “Bill” Hoffman. Bill and Gerrie were soul mates and enjoyed almost 64 years of marriage. Gerrie dedicated her life to being a great wife and mother, while taking care of her entire family, whom she loved very much. Following Bill's retirement from the Wisconsin Telephone Company in 1982, they built their retirement home on the Lower Red River in Gresham. Bill and Gerrie enjoyed many seasons in Gresham, and winters in Florida. Gerrie was an avid sports fan, especially for the Green Bay Packers, and enjoyed the trips to the casino. Gerrie was a member of the Harvey Pierre Post 2778 VFW Women's Auxillary, the Gresham Women's Club, St. Joseph Catholic Church in Appleton, and St. Francis Solanus Catholic Church in Gresham. She was a staunch Catholic and lived her faith every day.

The funeral liturgy for Gerrie will be held at 12:00 noon on Thursday, July 12, 2012 at ST. JOSEPH CATHOLIC CHURCH, 410 W. Lawrence Street, Appleton. Fr. John Holly, a close family friend for over 32 years, and Deacon C.F. Dedman will be officiating. Burial will take place at the parish cemetery. A visitation will be held at the church from 9:30 am until the time of mass.

Special thanks to the entire staff of the Heritage, Cherry Meadow Hospice, Dr. Douglas Meyer and his staff, and Dr. Jack Swanson, for their compassion and love for Gerrie.

Gerrie was truly a member of the greatest generation.

Mom, you will live forever in our hearts. Love, your family