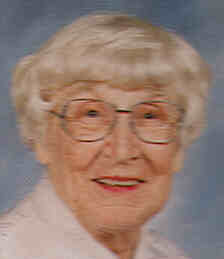 Geraldine ‚ÄúGerrie‚Äù LaBore, Appleton, 87, died Monday morning, August 9, 2004. She was born January 19, 1917, to the late George and Ida (Kirk) Leinwander, in Appleton, where she was a resident all of her life. Gerrie was baptized at St. Paul Ev. Lutheran Church, where she was a life-long active member. On June 25, 1949, in that same church, she married Richard P. LaBore. On Thursday, August 12, 2004, she will have her funeral at that church which was the nucleus of her life. She and her husband served on many boards and committees and programs, and sang in the choir. She was a volunteer for the school library program, and was active in many committees such as the church outreach program, and delivered tapes of the church services to shut-ins, who were unable to attend services. Up to her death she continued to play in the church bell choir, helped to count the collection money and sang with a group that regularly visits Rennes Nursing Home to uplift the residents there.

Gerrie led an active life. As a 1934 graduate of Appleton High School, she continued to organize annual class reunions to help keep classmates in touch. Directly after graduation from high school, Gerrie was awarded the job of secretary to Congressman George Schneider in Washington, DC, and worked in that capacity during his last term in office. During that time she attended the inauguration of Franklin D. Roosevelt, by special invitation and was invited to a luncheon with Mrs. Roosevelt at the White House. From 1939 until the birth of her daughter in 1952, she worked for Scolding Locks Corporation. Before re-entering the workforce in 1956 to work for the Brady Company, then located in Appleton, she helped actively with the March of Dimes.

In 1961, she went to work for the City of Appleton as Deputy-Treasurer under Ray Feuerstein. After nine years, she was appointed interim treasurer when Mr. Feuerstein retired from office. In 1972, she was elected Treasurer by an overwhelming margin, and continued to be re-elected to the post until her retirement in1983. Her term of office saw the changing of the tax roll from a manual system using handwritten ledger books and adding machines to a computerized system. She said that it was important to remember that ‚Äúthe people of Appleton are my boss‚Äù and ‚Äú tax payments would always be collected with a smile and a thank you.‚Äù

Sports played a big roll in Gerrie‚Äôs life. As a young woman, she and her sisters were competitors in softball and bowling leagues. Up until her death she was bowling in 2 leagues, and played in a golf league at Reid Municipal Golf Course. She was a charter member of the Appleton Curling Club, and participated in the formation of the State Women‚Äôs Curling Association. At the age of 60 she took up running as a sport and competed in many local fun runs and a few marathons. Gerrie ran her last marathon at age 81, and finished in a very respectable time. She continued to do a few fun-runs after that. She enjoyed regularly attending the soccer games of her grandniece and grandnephew.

Gerrie is survived by her daughter and son-in-law, Janette and Paul Domke, Kingston, IL; her sister and brother-in-law, Betty and Jimmie Cutler, Appleton; god children, Jimmy (Jan) Schroeder and Karen (Bill) Drecktrah. She is further survived by a special niece and nephew, Casey and Kyle Korth and their children Dylan and Kendall; Dave and Diane Schroeder and family, Shari and Warren Scheibe and family; Carol Hedtke and Leonard and Julie Gerrits II and family. She was preceded in death by her husband Richard P. LaBore in 1985, four sisters, Lucille (Kelly) Schroeder, Bernice Leinwander, and Pearl (Leonard) Gerrits, and her special cousin, Leona Born.

Funeral services for Geraldine will be held at 2:00 pm. Thursday, August 12, 2004, at ST. PAUL EV. LUTHERAN CHURCH, 302 North Morrison Street, with Reverend Ralph C. Waack officiating. Burial will be in Appleton Highland Memorial Park. Friends may call at the funeral home from 4-8 pm, Wednesday and on Thursday at the church from 1:00 pm, until the time of the service. A memorial fund is being established.

She will be remembered for her untiring devotion to God and family, and her selfless giving of her many gifts to those who needed her. We will miss her.