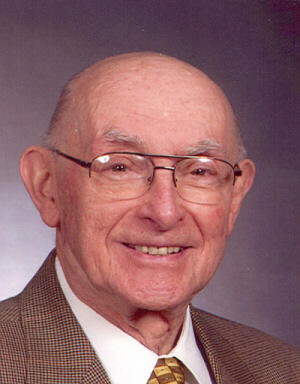 On Thursday, October 2, 2008, the soul of Gerald Robert Cudworth went to his heavenly home which was prepared for him by his Savior, Jesus Christ. Gerald was born in Fond du Lac, Wisconsin on August 12, 1927, the son of the late Arthur and Mabel (Buntrock) Cudworth. He was made a child of God through baptism and was confirmed at Redeemer Lutheran Church in Fond du Lac. Gerald graduated from Winnebago Lutheran Academy in Fond du Lac on June 10, 1945, and attended Dr. Martin Luther College in New Ulm, Minnesota for two years. He received his Bachelor of Science in Education degree from Concordia Teachers' College in River Forest, Illinois and his Master of Arts in Social Studies from Michigan State University in East Lansing, Michigan. Gerald spent a total of forty-five years in the ministry teaching at Lutheran schools in Michigan. He was the principal and teacher at Mt. Olive Lutheran School in Bay City, Michigan for seventeen years and at St. John's Lutheran School in Westland, Michigan for five years. Gerald was also a professor at Michigan Lutheran Seminary in Saginaw, Michigan for twenty-three years, from 1969 until 1992. There his primary subject was U.S. History. During his years of teaching, he also served as church organist and choir director at several Wisconsin Evangelical Lutheran Synod congregations in Michigan.

On December 27, 1959, he was united in marriage to Irene Rakow at St. John's Lutheran Church in Hayes, Wisconsin. They enjoyed traveling to many parts of the world, and in the past twelve years had enjoyed several cruises. Gerald was very active in many church and WELS committees and ministries. Serving the Lord in any way he could gave him great delight and satisfaction. Currently, he was a member of Mount Olive Ev. Lutheran Church in Appleton. Following his retirement from the teaching ministry, he and his wife moved to Wisconsin where Gerald worked part time at several locations for Landmark Staffing and later for Fox Valley Surgical Associates. He also volunteered in various capacities at the Appleton Medical Center and as an ESL (English as a Second Language) tutor.

The Christian Funeral for Gerald will be held at 11:00 AM on Monday, October 6, 2008 at MOUNT OLIVE EV. LUTHERAN CHURCH, 930 E. Florida Avenue in Appleton with Rev. Robert F. Raasch officiating. Entombment will be in Highland Memorial Park. Friends may call at the funeral home on Sunday afternoon from 3:00 PM until 6:00 PM. and again Monday morning at the church from 10:00 AM until the time of the service.

In lieu of flowers, memorial funds are being established for Mount Olive Ev. Lutheran Church and Michigan Lutheran Seminary.