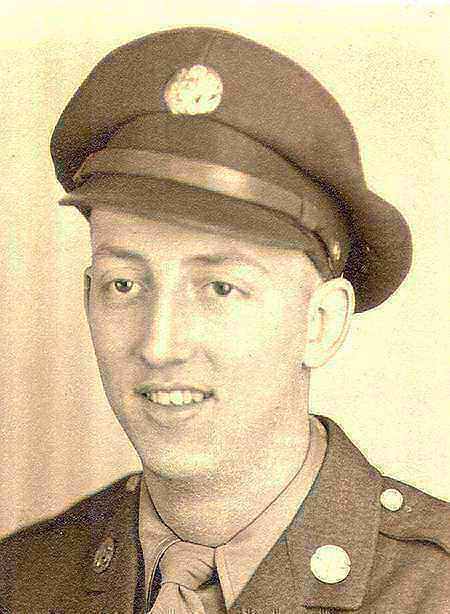 On Friday, June 24, 2005, the world lost a very good man. George W. Krueger, Jr., age 80, succumbed to his death after a lingering illness of chronic lung disease. George was a man of great heart who lived an ordinary life filled with hard work, simple truths, good humor and common kindness.

George, a life long Appleton resident, was born April 6, 1925. He grew up on Elsie Street the son of the late George W. Krueger, Sr. and Angeline (Severson) Krueger. George attended Washington Grade School, Wilson Junior High and graduated from Appleton High School in 1943. In 1943, George enlisted in the Army Air Corp. He was a member of the 302nd Fighter Control Squadron, and served on Hawaii and Iwo Jima in the Pacific Theatre. Upon returning from the war, George attended Lawrence College (University). On June 14, 1947 he married Lois Deschler at St. Joseph Catholic Church. He worked as an accountant for the Wisconsin Rendering Company from 1948 to 1970, before moving on to work for Wisconsin Electric from 1971 until retiring in 1991. George also served as President of Wisconsin Electric‚Äôs Employee Mutual Benefit Association (EMBA).

Those who had the pleasure to know George, will remember well, what a marvelous conversationalist he was, how well read he was and what an absolutely splendid sense of humor he had. Few could turn a phrase like George. He was an expert on Appleton history and lore and had a legendary memory of all things old in Appleton. George was a jazz music lover extraordinaire and possessed an amazing, in-depth knowledge of jazz music and musicians. He was a member of the American Philatelic Society. Stamp collecting was a passion, as was boxing. He also had the misfortune of being a lifetime Chicago Cubs fan, stemming from his childhood, when Cub‚Äôs catcher Gabby Hartnett was his baseball hero. George was a proud member of the AHS-Class of 1943, (there is simply a special bond among the Class of ‚Äô43). He never missed a class reunion, nor ever forgot the 9 classmates the Class of ‚Äô43 lost in WWII. After retirement, George and Lois took extensive trips to Russia and China where they made many new friends. They also visited New Orleans, the Mecca of Jazz music, where George soaked up the sounds of his beloved jazz. In June 2004, George attended the 302nd Fighter Control Squadron Reunion, reuniting with old war buddies he hadn‚Äôt seen in nearly 60 years was a glorious and fortifying experience.

People liked being with George, he was bright, engaging, interesting and absolutely fun to be around. He was as good of husband, as good as father and as good of friend, as the good old city of Appleton has known. While he will be deeply and sorely missed by his family and friends, he will be warmly and richly remembered as a good husband, a good father and a good friend who lived well, laughed often, loved much and who left the world better than he found it. Though he certainly struggled during his illness, George dealt with his illness nobly and eloquently, and never lost his good humor. Not long ago, he remarked, ‚ÄúWhen you‚Äôre in the shape I‚Äôm in, you hate to buy green bananas ‚Ä¶‚Äù His sense of humor and upbeat attitude lifted his family immeasurably while coping with his illness. George had a long and wonderful life and he was very lucky, (as was his family), you see, he knew his family loved him and he returned that love in full measure.

The family extends heartfelt thanks and deep appreciation to George‚Äôs son-in-laws, Dave DeBraal and Duane Dougherty, who gave of themselves unfailingly to his care and comfort and ensured every need was met. The family also extends sincere gratitude to Affinity Visiting Nurses Hospice Services for the extraordinary comfort, care, support and compassion provided.

George was an active member of St. Joseph Catholic Church of Appleton. He had a profound appreciation and affection for the St. Joe‚Äôs Community and happily volunteered his services for a variety of duties, including ushering, cleaning the church and serving as a member of the Senior Citizens Social Committee. The Funeral Liturgy for George will be held on Monday, June 27, 2005 at 10:30 am at ST. JOSEPH CATHOLIC CHURCH, 410 W. Lawrence Street, with Father Larry Abler officiating. Burial will be in St. Joseph Catholic Cemetery in Appleton. Friends may call at the Sunday, June 26, 2005 at the Wichmann Funeral Home from 4:00-7:00 pm and Monday at the Church from 9:00 am until the time of Mass. In lieu of flowers, a memorial is being established.

I have fought the good fight, I have finished the race, I have kept the faith. Henceforth there is laid up for me the crown of righteousness. 2 Timothy 4:7-8