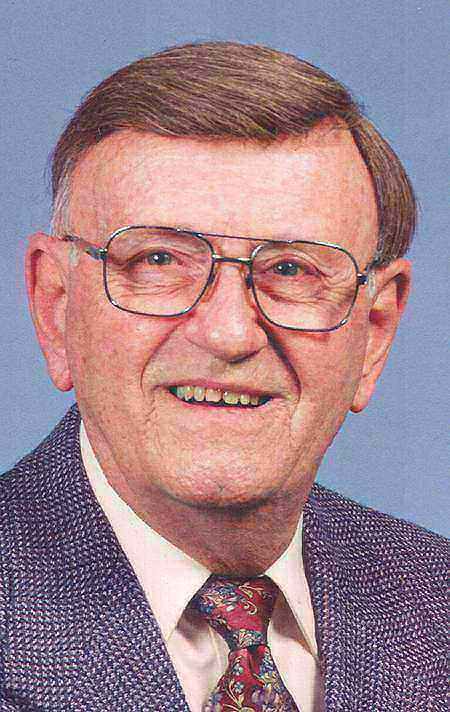 George William Engel, age 89, died on January 27, 2011 at a local hospital surrounded by his family following a brief illness. He was born December 14, 1921 in Appleton, the son of the late Frank and Cecilia (Amend) Engel. George graduated from St. Joseph Grade School and St. Mary‚Äôs High School in Menasha. After high school, he began working at the Zwicker Knitting Mill. George honorably served his country during World War II in the Army and then the Air Force before returning to Zwickers where he worked for 43 years until his retirement in 1984.

George was a machine operator for many years, a pattern maker and a researcher during the latter part of his career. George enjoyed bowling, fishing and socializing with his many friends. He particularly enjoyed his annual northwoods vacation in Conover, Wisconsin and family parties and holiday gatherings were a special treat for him, especially Thanksgiving dinner at the Giesens. George also treasured his daily coffee with his brother, Jerry and his weekly Sunday brunches with his friends.

George was a devout catholic and a member of St. Joseph Parish in Appleton. In his early years, he was a member of the Young Men‚Äôs Choir and continued participating in church activities during his life.

A Mass of Christian Burial will be held at 10:30 a.m. on Tuesday, February 1, 2011 at St. Joseph Catholic Church, 410 W. Lawrence Street, Appleton, with Fr. Jim Leary OFM. CAP. officiating. Friends will be received at the church from 8:30 a.m. until the time of Mass.

George‚Äôs family would like to extend a sincere thank you to friends: Bernie Mueller, Ralph and Addie Ulman, Jim and Barb Benzschawel and many others for their companionship and kindness to George throughout his life.

FOR THOSE I LOVE
FOR THOSE WHO LOVE ME

When I am gone, release me, let me go. I have so many things to see and do. You mustn‚Äôt tie yourself to me with tears. Be happy that we had so many years. I gave you my love; you can only guess how much you gave me in happiness. I thank you for the love you each have shown, but now it‚Äôs time to travel on alone. So grieve awhile for me, if grieve you must, then let your grief be comforted by trust. It‚Äôs only for awhile that we must part, so bless the memories that lie within your heart. I won‚Äôt be far away, for life goes on, but if you need me, call and I will come‚Ä¶. Though you can‚Äôt see or touch me, I will be near. And if you listen with your heart, you‚Äôll hear all of my love around you, soft and clear‚Ä¶ and then‚Ä¶ when you must come this way alone‚Ä¶I‚Äôll greet you with a smile and say ‚Äúwelcome home‚Äù.