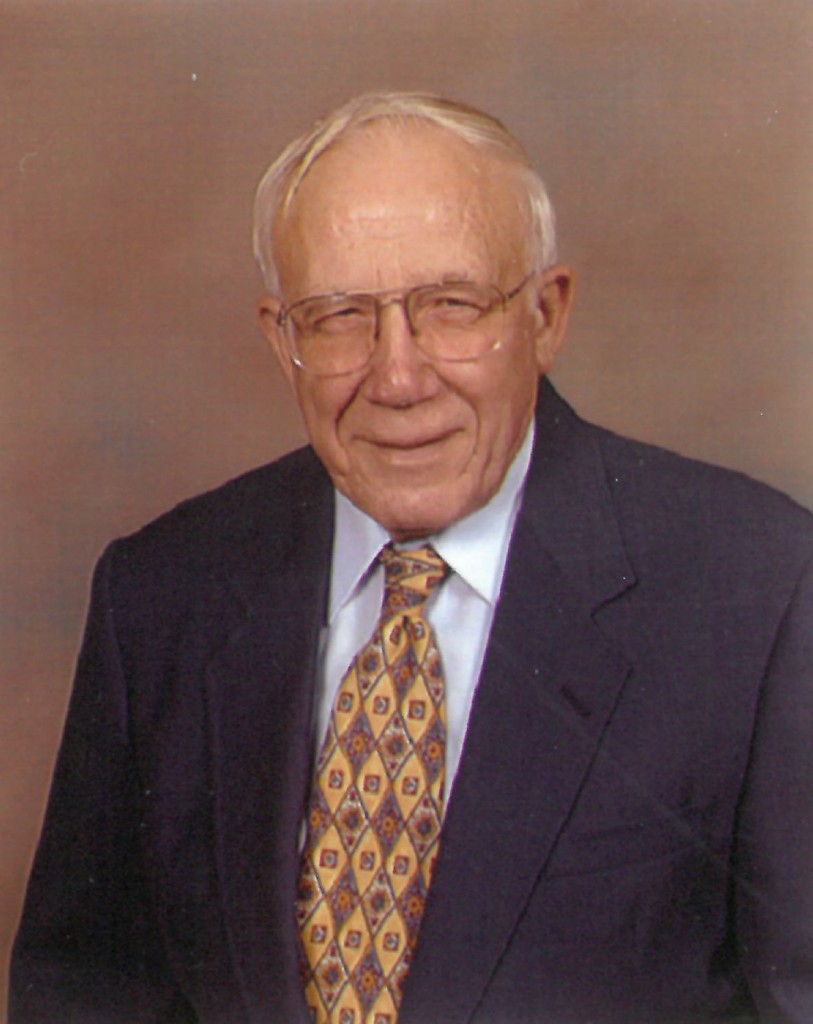 On Friday morning, September 21, George R. Gavronski, 92, passed away quietly into the Lord’s embrace after a long and fulfilled life.

George was born in Menasha on May 3, 1926 to Frank and Margaret (Klatkiewicz) Gavronski. He was a life-long member of St. John the Baptist Catholic Church. George was a proud World War II veteran, having served in the Army within the Infantry, Military Police and Transportation Corps. He was a dedicated employee of the Geo. Banta Publishing Company for 45 years, retiring in 1988.

In 1952 he was united in marriage to Norma Krull at St. Lawrence Catholic Church in Navarino, Wisconsin. Their marriage was blessed with four sons; Michael, Daniel (Joyce), Kellen (Lisa) and Paul (Lisa). They were also blessed with nine grandchildren and ten great-grandchildren.

George was a member of the Knights of Columbus, American Legion Post 152, Banta 25 Year Club and Holy Name Society. Sunday services and reciting the Rosary were a must for George. Polish tradition in the Gavronski family was cherished throughout his lifetime.

George inherited a love for fishing from his dad and enthusiastically shared that passion with his sons. Whether fishing for walleyes from the railroad bridge in Omro at 2 a.m., trout fishing in Suring on the Oconto River or going after some perch for mom to fry up for supper at the cottage on Pickerel Lake, Dad was always at the ready. If the fish weren’t biting, or the weather wasn’t cooperating, Dad could be found “puttering around” out in the garage or perusing his abundant collection of various things he “might (or might not) need” someday. As the years passed, his sons discovered that they, too, (to varying degrees) had inherited this trait for acquiring the scattered and sundry. Dad could be a stickler for the details, too. It must’ve been the “good soldier” in him that carried on through the years. The dishwater was never hot enough, and the frying pan had to be inspected before being put away.

Over the years, mom and dad’s social calendar was always full. Sunday night bowling league, weekly cards or dominos with friends or a Saturday night trip to the dance hall were always on the agenda. If there was a polka band playing within 50 miles, you could count on mom and dad to probably be there.

In his later years George enjoyed traveling, the performing arts, breakfast with fellow Banta retirees and watching the Brewers and Packers. If he was feeling lucky, a quick jaunt to the casino to collect some winnings might be in store. He had a “system” (or so he claimed).

George will be welcomed in Heaven by his two infant sisters Dorothy and Stella, his parents, his sister Mary and her husband Joe Franczek and their children Teresa and James, father and mother-in-law Erie and Mary Krull, brothers-in-law; Joe Held, Joe Mitchell, Edwin Krull and Tom Wolf, daughter-in-law Debra Mae Terry, wife of his son Michael Gavronski and sisters-in-law Nola Krull Wolf and Sylvia Wippich Krull.

Three loving sisters survive; Elizabeth Held, Lorraine Mitchell, and Rose (Grant) Beckett. Members of Norma’s family are two brothers, Keith Krull and Donald (Arlene) Krull.
Family and friends are invited to gather at Wichmann Funeral Home – Laemmrich Chapel, 312 Milwaukee Street, Menasha on Tuesday, September 25 from 5:00-7:00 PM. Visitation will be held again at 10:00 AM on Wednesday, September 26, 2018 and will conclude with a celebration of George’s life at 11:00 AM with Deacon Don Schultz officiating. Full military honors will immediately follow the service. Private interment will be at St. John Cemetery Thursday morning.

Someday we’ll see you on the other side. Just have the fishin’ poles ready and your dancin’ shoes on!