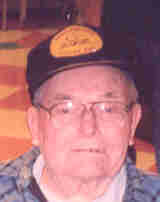 Age 90, died Saturday afternoon, February 7, 2004, at Riverside Hospital, Waupaca. He was born October 12, 1913, to the late Henry and Anna (Mader) Welhouse, in Kaukauna, where he was a resident until 1955, at which time he moved to Milwaukee and in 1975, he moved to Antigo area. While a resident of Kaukauna, George, was employed by the Kaukauna Machine Corporation and in Milwaukee he was a heavy equipment operator for a road paving company. He served with the U. S. Army Air Corps during WW II and was a member of Operating Engineers Local #139 for 50 years. George enjoyed raising animals, building ice fishing shanties and the love of his life, fishing. Survivors include 4 sons and daughters-in-law, Richard and Jerri Welhouse, Hortonville; Eugene and Anne Welhouse, Riverton, WY; David and Dixie Welhouse, Cedarpark, TX; George J. and Amy Welhouse, Menomonee Falls, WI; seven daughters and six sons-in-law, Eunice and Don Grissman, Menasha; Elayne and Dennis Lehrer, Neenah; Sharon and Jerry Pitt, Kaukauna; Diane and Harvey Tessman, Wales, WI; Pauline Bohlmann, New London; Christina and Tom Zieher, Mukwonago; Cynthia and Joe Mindiola, Coatsville, IN; five step-children, Diane Flitsch, Gene Shanks, Robin Shanks, Kenneth Shanks and Judy Shanks. George is further survived by 44 grandchildren; 48 great grandchildren; his former wife, Elizabeth Obermeyer, Kaukauna; two brothers, Elmer Welhouse, Union Grove, WI; Edward Welhouse, Kaukauna; three sisters, Leona Gerhartz, Brillion; Luana Schwalenberg, Kaukauna; and Vernie Jonen, Kaukauna. He was preceded in death by his second wife, Frances (Jansen) Welhouse, his third wife Doris May (Baker) Welhouse, two daughters, JoAnn Fredrickson and Geraldine Burnell. Funeral services for George will be held at 12:00 pm, Saturday, February 14, 2004, at the funeral home, with Deacon Pete Reinl officiating. Friends may call at the funeral home from 10:00 am, Saturday until the time of the service. A memorial fund is being established.

A special thanks to Diane Flitsch and George Welhouse, Jr. for ALL the love and care they gave to George.