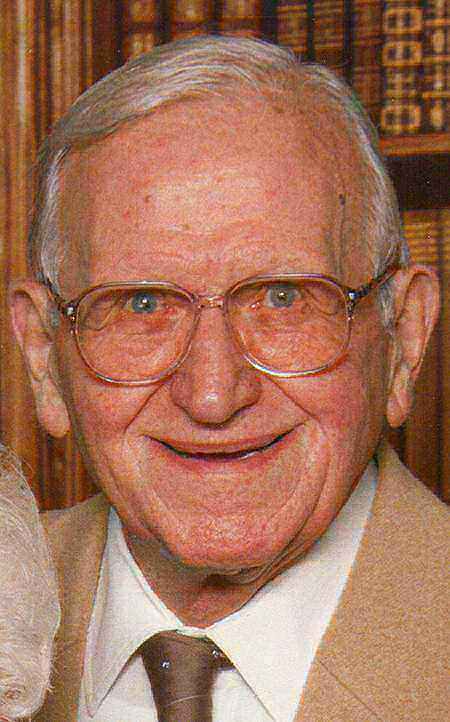 George B. ‚ÄúGuy‚Äù Friedwald, age 90, passed away Saturday, March 5, 2005, at Franciscan Care Center, Appleton. George was born May 25, 1914, in Chicago, Illinois, the son of the late John and Matilda (Figel) Friedwald. He was united in marriage to Elizabeth Murphy on December 14, 1946. She survives.

George worked most of his life as a salesman for Westinghouse Electric Supply. He served his country during World War II in the Army Air Corps as a crew chief for his plane ‚ÄúSkinny‚Äù, which made over 180 missions, all with safe returns. For his valiant service, George was awarded the Bronze Star. The Friedwalds were parishioners of St. Joseph Catholic Church in Appleton, and George was a member of the Knights of Columbus and their Fourth Degree. He was an avid golfer and enjoyed traveling.

Survivors include his wife of 59 years, Elizabeth ‚ÄúBetty‚Äù Friedwald; two sisters-in-law, Louise M. Smith and Ruth I. Murphy, both of Appleton; and many nieces and nephews.
He was preceded in death by a sister, Florence Lawrence, a brother, Edward Friedwald, and a nephew, James Lawrence.

The funeral liturgy for George will be celebrated at 6:00 P.M. Tuesday, March 8, 2005, at ST. JOSEPH CATHOLIC CHURCH, 410 West Lawrence Street, Appleton, with Fr. Larry Abler, OFM Cap., officiating. Interment will be in Riverside Cemetery, Appleton. Friends may call from 4:00 P.M. Tuesday until the time of services directly at the church. A memorial fund is being established.

The family would like to thank the wonderful people at the Fox River Memory Care and Assisted Living, the Angelus Retirement Community, and the Franciscan Care Health Center for their care of George.