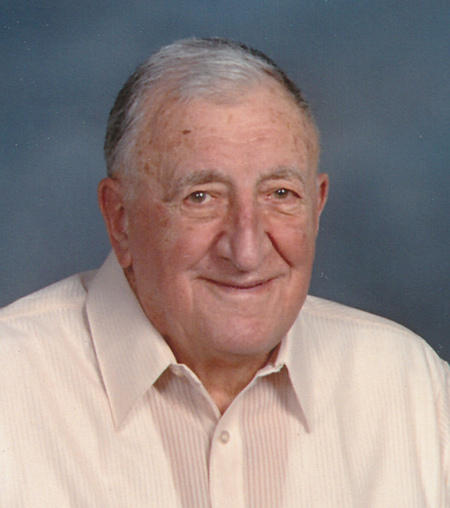 George A. Klemp, age 96, of Appleton, passed away at Brewster Village on Friday, September 6, 2013. George was born on March 23, 1917, to the late Charles and Martha (Pantzlaff) Klemp. He married Anita Heigl on May 17, 1937, in Appleton; she preceded him in death on March 23, 1997. George was a loving husband, father, grandfather and great grandfather. He was employed as a wire finisher at Appleton Wire Works for over 39 years. George enjoyed bowling, golfing, puzzles and painting. He was also an avid hunter and fisherman. George was a long-time member of the Knights of Columbus. Survivors include his sons, Bob (Lorna) Klemp and John (Eva) Klemp, and his daughter, Marie (Harry) Heier; his seven grandchildren, Todd (Alisha) Klemp, Noelle (Brian) Timm; Trevor and Tricia (Seth) Centner; Howie (Brenda) Heier; Heather (Anthony) Lane and Heidi (Jeremy) Johnston; his great grandchildren, Tobias, Sophia and Stella Timm and Thea Klemp; Isabella, Lydia, and Oscar and Greta Centner; and Shea and Audra Heier; Andrew and Alexander Lane, and Marlow and Lucy Johnston. He is further survived by many nieces, nephews, cousins, and other relatives and friends. He was preceded in death by his brother, Rueben Klemp and his sister, Edna (Elmer) Filter.

The Funeral Liturgy will be at 10:30 a.m. on Friday, September 13, 2013, at WICHMANN FUNERAL HOME, 537 N. Superior Street, Appleton, with Fr. Jim Leary, O.F.M. Cap. officiating. Friends may call directly at the funeral home on Friday from 9:30 a.m. until the time of services. Interment will be in St. Joseph Cemetery, Appleton. The family would like to extend a sincere thank you to the staff at Brewster Village for their loving care and support. A memorial has been established in his name. Online condolences may be offered at www.wichmannfargo.com