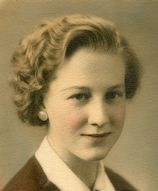 Genevieve S. Reuter, age 96, of Kaukauna, passed away on Thursday, July 19, 2012, at St. Paul Home, Kaukauna. Gen was born on February 6, 1916 in Appleton to the late Prof. A. J. and Mary (Huhn) Theiss. She graduated from Appleton High School and Bowlby's Business College. Gen married Frederick “Fritz” Reuter on July 13, 1940. She worked as secretary for Pettibone-Peabody Co., Appleton, Omar Bakery and G&L Bickford Machine Tool Co. in Kaukauna, retiring in 1979. Gen was a member of Holy Cross Parish, served on the Parish Council, was a member and past president of the Ladies of Holy Cross, a member and past president of Our Lady of Guadalupe Society in Menasha, past president of the National Ladies Auxiliary of the American Racing Pigeon Union, member and past president of the AARP Kaukauna Chapter #1834, member of the Kaukauna K.C. Ladies, K.C.H.A. (formally Hospital Auxiliary), Environmental Center and the Golden Agers. She also was especially proud to receive the 2006 Volunteer Lifetime Achievement Award. She is survived by her children: Fr. John Reuter, a priest of the Diocese of Green Bay, a missionary in Santa Maria Yucuhiti, Mexico; Janet (Ron) Van De Hey, Kaukauna; Helen (Roger) Van Gompel, Appleton; six grandchildren: Major Eric Van De Hey, Michigan, and Katherine Van De Hey, Neenah; Dawn (Tim) Retzlaff, Kaukauna; Heidi (Kevin) Van Zeeland, Kaukauna; Kara (Bart) Thebo, Kimberly; Sara (David) Reybrock, Fremont; Tucker Van De Hey (special friend Alissa), Oconto; twelve great grandchildren: Elaina and Marley Van De Hey; Kyle, Ryan and Lauryn Retzlaff; Jacob and Olivia Van Zeeland; Blake and Easton Thebo; Kaden, Keagan and Macy Reybrock. She is further survived by her brother, Arthur Theiss, Appleton; her sister-in-law, Carol Theiss, Appleton; and many wonderful nieces, nephews, and other friends, including her special friend Lenore Ball. Gen was preceded in death by her husband: Fritz on May 7, 1979; her parents; five brothers: George, John, Ignatius, Cyril and Joseph Theiss; three sisters: Mary Margaret Kamasky, Ruth Shilling and Cecelia Bruex; six sisters-in-law, Gertrude, Lois, Jean and Dorothy Theiss, Phillipa Reuter and Marie Busse; and five brothers-in-law, Robert Busse, John Reuter, Jim Schilling, Norman Bruex and Edmund Kamasky. The Funeral Liturgy will be at 11:00 a.m. on Monday, July 23, 2012, at HOLY CROSS CATHOLIC CHURCH, 309 Desnoyer Street, Kaukauna, with Fr. John Reuter officiating. Friends may call directly at the church on Monday from 9:30 a.m. until the time of services. Interment will be in Holy Cross Cemetery. In lieu of flowers, a memorial has been established in her name to benefit Fr. John Reuter's Mission. Gen's family would like to extend a sincere thank you to the staff and her dear friends at Golden Venture, and the staff at St. Paul Home, for their loving care. Online condolences may be offered at www.wichmannfargo.com

It takes a long time to get used to the loss of someone we love. But it's important to remember that when people die, they leave something very special behind. They leave us memories of many things they said and did. And as long as we have those memories, the people we love will live forever in our hearts and minds.