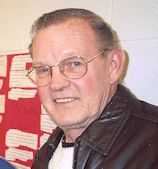 Gary Stengl, devoted husband, father and best Pop-Pop ever, age 70, of Appleton, passed away peacefully, surrounded by his loving family on Wednesday July 18, 2012, after a valiant two and a half year battle with brain cancer.

Gary was born to the late Veronious and Adeline Stengl on June 29, 1942 in Antigo.He was a proud 1959 graduate of Antigo High School and later studied to become a journeyman electrician. Gary worked for 20 years at the C.A. Hooper Company and 26
years as a steam plant technician for Menasha Utilities.

Gary married the love of his life, Maureen on August 5, 1961 in Elcho, WI and spent the next 50 years together building a wonder family that he cherished deeply. Gary's favorite pastime included wood working. He especially enjoyed sharing time in the
outdoors with his family; golfing, hunting, biking, camping and kayaking. He was a positive influence on all the lives he has touched.

Gary is survived by his wife, Maureen; his four children, Kurt Stengl, Robin (Julie)Barlament, Kevin (Carol) Stengl and Shauna (Jason) Schmidt. He will be fondly remembered by his grandchildren; Crystal and Leah Becker, Alex Barlament, Hailey and Michael Stengl, and Brittney and Bryce Schmidt and one great granddaughter; Autumn Becker. He will also be missed by his brother; Richard and sisters; Elaine and Judy. Gary was preceded in death by his parents

The Stengl family would like to thank the wonderful staff at Theda Care at Home for their kindness and support.

A private family memorial service will be held at a later date. Memorials to the Brain Tumor Support group of Appleton are appreciated.