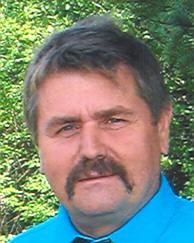 Van Vonderen, Gary G.
‚ÄúPickle‚Äù
Gary G. Van Vonderen, age 52, died unexpectedly, Saturday afternoon, November 18, 2006. He was born January 20, 1954 to Joseph and Luella (Petit) Van Vonderen, in Kaukauna, where he was a resident all of his life. Gary was the proud owner of Van‚Äôs Service for over 30 years. He was Assistant Fire Chief for Town of Kaukauna-Vandenbroek Fire Department and had been with the department for 25 years. Gary loved hunting on his land near Shiocton and had just built his dream cottage on Lake Winnebago. His family was the most important thing in his life. He was a member of Holy Cross Catholic Church. He is survived by his wife, Theresa H. (Goy) Van Vonderen, to whom he had been married for 25 wonderful years; four children, Shawn Van Vonderen; Terra Van Vonderen and her special friend, David Swanson; Dustin Van Vonderen and his special friend, Rhiannon Hancock; Tamara Van Vonderen, all of Kaukauna; his mother, Luella Van Vonderen; a brother John Van Vonderen, Kaukauna; three sisters, Shirley (Larry) Abts, Florida; Karen (Tom) Portman, Freedom; Lynn Hicks, Washington; his mother-in-law, Delores Goy; a sister-in-law, Mary (Ben) Ortiz, California; a brother-in-law, Franklin Goy, North Carolina; and many nieces, nephews, aunts, uncles, other relatives and friends. He was preceded in death by his father, Joseph Van Vonderen and a brother-in-law, Jeff Hicks. The funeral liturgy for Gary will be held at 11:00 am, Wednesday, November 22, 2006, at Holy Cross Catholic Church, 309 Desnoyer Street, Kaukauna, with Father Jack Mullarkey officiating. Burial will be in Holy Cross Cemetery. Friends may call at the funeral home from 4 to 8 pm, Tuesday and at the church on Wednesday, from 10:00 am until the time of the mass. A parish prayer and scripture service will be at 7:00 pm Tuesday. A memorial fund is being established.