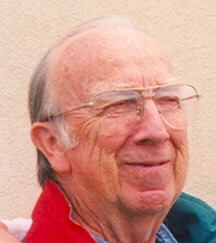 Fredrick A. Schmidt, 84, of Appleton, died peacefully on Thanksgiving, November 23, 2006. He was born August 24, 1922, to the late Fred G. and Laura M. (Krebs) Schmidt in Berlin, Wisconsin. Fred was a self-taught career artist. He started his career as a store window dresser at H. C. Prange Company. During WW II, he served in the 220th Regiment Fine Company, U. S. Army, through Normandy, Northern France, and Rhineland campaigns as a Private First Class. He created signs, murals, training posters and maps for the Army. Fred earned a WW II Victory Medal, four overseas ribbon service bars, one service strip, a European-African Middle Eastern Theater Ribbon with three bronze battle stars and a Good Conduct Medal. Following the war, he was employed as a staff artist for the The Appleton Post-Crescent for many years. Fred created the covers of the Lifestyle section, painted advertisements, and in addition to hand crafted political cartoons. Fred was a co-founder of the Hang-Up Studio in Neenah and was also a member of the Appleton Gallery of Arts. During retirement, Fred continued his artistic endeavors and spent many enjoyable hours in his home studio. In addition to his involvement in art, he enjoyed playing golf, spending time at his family cottage on Legend Lake, gardening and spending time with his family and friends. He is survived by his wife Elizabeth (Betty Beglinger) Schmidt, to whom he had married for 60 years; his five children, Cheryl (Jon) Griffith, New London; Tom (Karen) Schmidt, Appleton; John (Janice) Schmidt, Tomah; William (Anne) Schmidt, Appleton; Ann (Dave) Hartwig, Wausau; ten grandchildren, Clint, Judd, Jordan, Bethany, Jarred, Mackenzie, Jesse, Tamra, Taylor and Austin; four great grandchildren, Sophie, Gus, Ben and Brogan. Fred was welcomed into heaven by his granddaughter, Jamie (Griffith) Kubiak, two sisters, Margaret Simson, Doris McCool and two brothers, Howard and Ollie Schmidt. A celebration of Fred‚Äôs life will be held at 6:00 pm, Tuesday, November 28, 2006, at the funeral home, with Reverend Jane Anderson officiating. Friends may call at the funeral home from 4:00 pm, until the time of the service. In lieu of flowers a memorial fund is being established in his name.