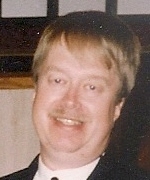 Frederick J. (Ted) Dungar, 58, died unexpectedly on November 26, 2013 in Dayton, Ohio at Miami Valley Hospital. Ted was the son of Richard and Dorothy Dungar and born in Appleton, Wisconsin on June 14, 1955. Ted grew up in La Crosse and graduated from Logan Sr. High School in 1974. He attended Western Wisconsin Technical College. Ted married Sarah Doakes on April 25, 1997 in Columbus, Ohio where he was employed as a Weld Line Press Operator for Select Industry.
Fred; call me Ted, loved working with his hands and enjoyed woodworking and auto mechanics. He was an avid gun and knife collector and enjoyed NASCAR racing. His favorite moments were spent with his grandchildren and teaching them the finer art of building birdhouses. Ted will be remembered as a loving husband and a kind and generous grandfather. He was very caring towards his family and was a loving care taker for his mother in her later years. Ted was a kind, funny and fabulous son, brother, uncle, nephew and cousin. He was a friend to all and will be forever loved and missed.
Ted is survived by his spouse of 15 years, Sarah, four step children, Tisea (Jason) Martin, Tiffany Willimans, Michael Williams, and Matthew (Justina) Willmans and 6 grandchildren. Surviving siblings include Richard Dungar of LaCrosse, Christine(Donald)Baumann of Hoschton, GA, Jessica(Ronald DeRooi)Bennie of Bettendorf, IA, nephews; Andrew, Brooks, Jarrod, Joe and Alex, nieces: Abigail, Kelsey and Carolyn, his aunt, Jacqueline(Dungar)(Tom)Bertram, Appleton and numerous cousins.
Preceding Fred in death are his parents, Richard and Dorothy Dungar, his uncle, Charles F. Dungar, MD and his brother-in-law, Steven Bennie.
Funeral services celebrating his life will be at St. Mary's Catholic Church, 312 South State Street, Appleton, Wisconsin on December 13th at 11:00 AM with internment at St. Mary's Cemetery. Cremation rites will be accorded in keeping with Ted's wishes. Wichmann Fargo Funeral Home is assisting the family. In lieu of flowers, memorials may be made to: Gettysburg Shelter for Men, St. Vincent's DePaul, c/o Christine Hampton, 1133 Edwin C. Moses Blvd Suite 308, Dayton, Ohio 45417