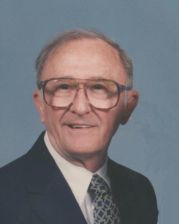 Frederick “Fred” F. Kohl, age 94, passed away on Saturday, March 11, 2017. He was born on October 30, 1922, to the late Louis & Louise (Poetzel) Kohl in Appleton. Fred resided in Appleton all his life.
He was working as a projectionist at the old Neenah Theater when he met his wife of 45 years, Joann (Krieg), and they married September 3, 1949. They raised 3 daughers: Nancy Buss (Gerald) of Antigo, Wisconsin, Debbie Cummins (Stan) of Las Vegas, Nevada, and Sandy Wright (David) of Vancouver, Washington. In the early 1960's, he was a projectionist at the 41 Outdoor Theater, and he worked in the maintenance department at Lawrence University until he retired in 1985. In his retirement, he was a volunteer at St. Elizabeth's hospital. He loved to play the organ and read.
He will be sadly missed by his 3 daughters, 9 grandchildren, and 16 great-grandchildren. He is preceded in death by his parents, Louis and Louise, his wife, Joann and 2 brothers and 2 sisters. Fred was a long-time member of Sacred Heart Parish in Appleton.
A memorial mass will be held on Saturday, March 25, 2017 at 11:00 a.m. at SACRED HEART CATHOLIC CHURCH, 222 E. Fremont Street in Appleton. Visitation will be from 9:00 a.m. until the time of the service.
Fred's family would like to thank the staff at Carolina Manor Assisted Living for the care they gave him during the final years of his long life.