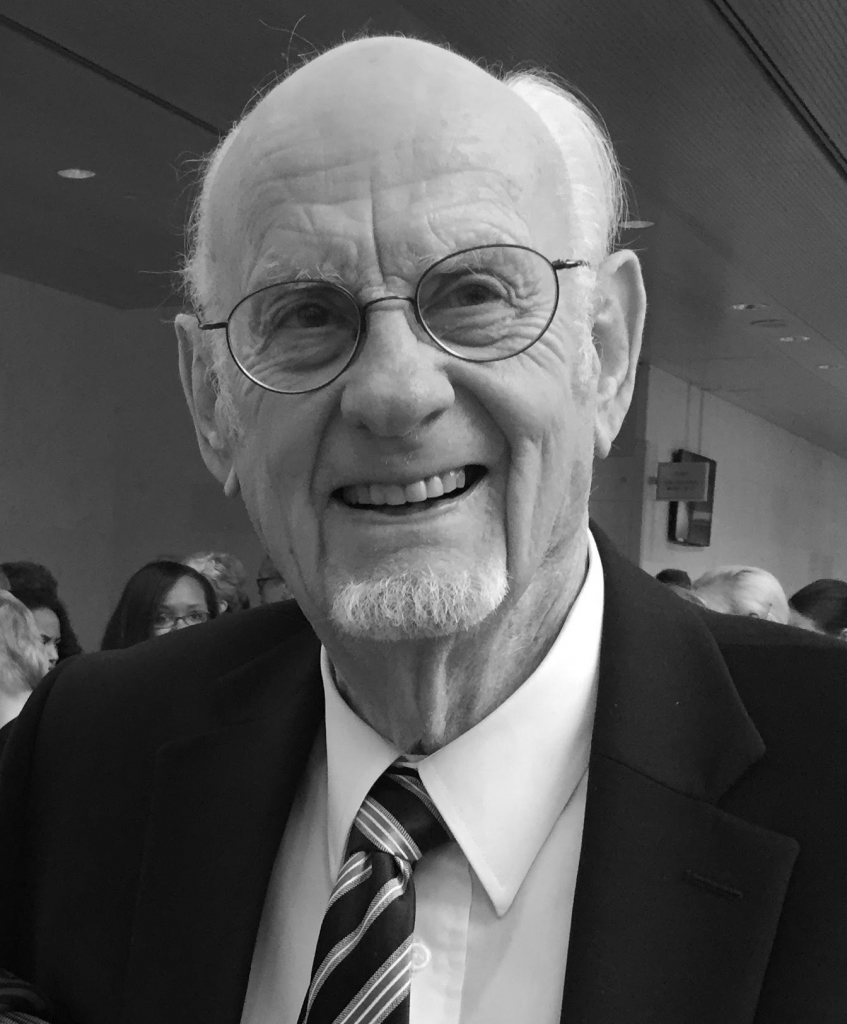 Jim Grist passed away peacefully at his Appleton home on May 3, 2019, surrounded by his wife and all five of his children. Jim was born on February 14, 1927 in Sioux Falls, South Dakota, son of the late Franklin and Gladys (Strite) Grist. He married Mary Lamers at St. Therese Catholic Church in Appleton on June 21, 1952. Jim grew up on Winona Court in Appleton in the house his father and mother built using patent royalties from the invention of the automatic pop-up toaster by his grandfather. He raised five children there with Mary who was the love of his life. Jim forged a 92-year legacy of invention, inspiration, love, and laughter.

Fascinated by the new technology of radar, Jim joined the Navy in WWII as a radar technician and served on a PT boat in the Chesapeake Bay. Upon returning to Appleton to study at Lawrence University, he met Mary, who captured his attention when she offed him a Hershey’s chocolate bar while waiting for a bus. He went on to study at Valparaiso Technology Institute in Indiana and became an electrical engineer. He worked many fruitful years at Miller Electric in Appleton, where he served as VP of Research and Development. He pioneered new techniques in electric arc welding that are still in use today. Importantly, he invented a special welder that enabled the NASA Apollo program to build the lunar lander module that landed on the moon in 1968.

He loved music and art. Jim enjoyed singing in church choirs and musical theater and tap dancing to Gilbert and Sullivan. He enjoyed dreaming up skits and musical reviews and performing them with friends at dinner parties and galas. With the help of Mary, Jim raised money for the Fox Valley Symphony Orchestra and for the bronze sculpture and fountain “Ring Dance” that graces Appleton’s City Park.

Jim was a ceaseless tinkerer. In his spare time, he helped invent the first computer-controlled cocktail dispensing machine and created a company called Electro Measure. The drink machine business dried up, but the remnants and technical innovation he inspired grew into Plexus Corp, a company that helps fellow inventors from all around the planet design, engineer, and manufacture, all kinds of innovations from medical equipment to electric bikes.

Jim also found time to build simpler things like home-made motor scooters, a paddlewheel itty-bitty barge for his daughters, and model airplanes which he and his sons spent hours flying and crashing in a field somewhere near county road EE. After most of the kids went off to college, Mary let Jim build a real airplane in the garage of their home. That project took about eight years and a great deal of marital stamina. But Jim’s two-seat open cockpit Skybolt biplane took off for the first time from Outagamie County airport in 1986. Jim spent many wonderful hours barnstorming the skies above the fields and farms of Wisconsin, and in his final hours happily embraced his “one last flight”.

He enjoyed flying that biplane over the Chain O’ Lakes in Waupaca, where the family had a cottage. Jim and Mary renovated the old Locksley Lodge on Round Lake. There Jim taught his children, and many others, to water ski, sail boats, swing on a rope, sing at sunset, eat sweet corn, and celebrate life with friends and marginally-safe do-it-yourself pyrotechnics. Locksley became the central gathering place for their children, grandchildren, cousins, aunts and uncles and the long line of friends who laughed with and loved Jim throughout his wonderful journey of life on earth and beyond.

He was preceded in death by his parents, a sister: Virginia (Bill) Farr, a brother: Jack Grist, and brothers-in-law: Joe Vanden Heuvel and Fr. Robert Vandenberg.

Funeral services for Jim will be held at 12:00 Noon on Friday, May 10, 2019 at First Congregational United Church of Christ in Appleton, with Rev. Dr. Stephen Savides officiating. Private burial will take place at Highland Memorial Park. Family and friends are welcome to gather at the church on Friday morning from 10:30 AM until the time of the service.

In lieu of flowers or other expressions of sympathy, we ask that people make donations in our father’s name to the Experimental Aircraft Association (EAA) Aviation Foundation, P.O. Box 3086, Oshkosh, WI 54903. In the memo line of the check designate it to the Jim Grist Flight Training Scholarship Fund.