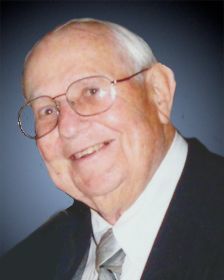 Frank “Rip” Winkel, a faithful child of God, was called home to His loving and waiting arms on Monday, October 17, 2016, surrounded by his loved ones. Frank was born in Green Bay on December 12, 1924, son of the late Max and Ida (Zittlow) Winkel. He was an outstanding athlete and lettered in many sports at Green Bay East High School. He was invited to try-out for the UW-Madison football squad, and Michigan State offered him a football scholarship, however World War II intervened, and military duty called. He served in the United States Navy as an Aviation Radio Man in the South Pacific, assigned to a squadron that transported the wounded. He was the humble recipient of several commendations, including the Presidential Certificate. It was during this time that he met the love of his life, Betty Freeman, who was working at the Oakland Army Base. The couple married shortly after the war ended, on March 17, 1946. Frank graduated from Milwaukee School of Engineering, and eventually their family grew with the birth of four daughters. During these years, Rip operated Van Wink TV in Appleton. The couple was longtime members of First English Lutheran Church. In 1965, they built a cottage on Lake Poygan, and Rip called it “Paradise.” He was so happy that he could spend his last months in “Paradise.” Frank and Betty spent fifteen years of retirement in Florida, but eventually returned to what Rip called “God's Country.” He was an avid fisherman, championship bowler, Packers shareholder, loved playing cards, camping, and watching westerns. Most of all, he loved being with his family.

The Christian Funeral Service for Rip will be held at 4:00 PM on Saturday, October 22, 2016 at the WICHMANN FUNERAL HOME, TRI COUNTY CHAPEL, 1592 Oneida Street in Menasha, with Rev. Paul Zittlow of St. Peter Ev. Lutheran Church in Larsen officiating. Interment will held at 11:30 AM on Monday in Trinity Lutheran Cemetery, Kaukauna. Family and friends are invited to gather at the funeral home on Saturday afternoon from 3:00 PM until the time of the service.