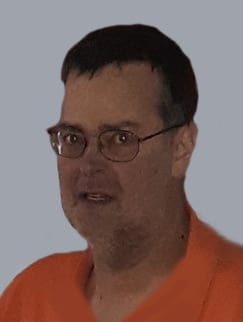 Frank was a funny guy with an unusual sense of humor.  He loved secretly taking pictures of unsuspecting family members and friends.  He also was a man of many and various skills.  He was the family tech guy and did everyone’s taxes.  He enjoyed leisurely drives and going fishing.  He was a Renaissance Man of sorts, who had an eclectic taste in music, enjoyed watching the night sky through his telescope, and played the banjo and drums.   He was also an accomplished cook who ran a restaurant with his dad as well as working as a chef at the White Gull Inn, Le Bon Appetit, Paper Valley, and most recently worked as a bartender at Friends and Neighbors bar.

A memorial service for Frank will  be held at 11:00 AM on Saturday, August 8, at St. Katharine Drexel Parish – St. Mary Church in Kaukauna.  Family and friends are invited to gather at the church on Saturday morning from 10:00 AM until the hour of the service.

Another announcement will appear when the date and time for the service have been determined.