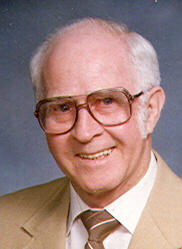 Frank J. Van Den Boom, age 92, of Appleton, passed away after a short illness on Oct 27, 2009. Frank was born in Little Chute, WI on December 3, 1916, the son of Peter and Amelia “Molly” (Luebke) Vanden Boom. He attended Stockbridge High School and received military training at Fort Sheridan, IL. As a member of the 75th Infantry Division he was in the third wave during the Normandy invasion. He fought in the battle of the Bulge, in Northern France and in the Rhineland. He was honorably discharged as Staff Sergeant from the 775th Ordinance Company. Awarded two bronze stars, like so many others, he never talked about the war. He was a member of the Harvey Pierre Post 2778 VFW in Appleton. He married Margaret Head, daughter of Larry and Hazel Head, at St. Mary's Catholic Church in Stockbridge, WI on Oct 26, 1946. He was owner of Artway Upholstery and later worked for Menasha Corporation where he retired after 23 years. He liked to play softball, sturgeon fish, deer hunt and bowl. He will be remembered always as a loving husband and father. He will be missed more than words can tell.

He is survived by his wife of 63 years, Margaret (Head) Van Den Boom, his son Tom, his brother Louis Vanden Boom and wife Donna, his sister in law Anna Rae Vanden Boom and many nieces and nephews. He was often referred to affectionately as uncle “king”.
Frank was preceded in death by his brothers: Charles, Cornelius “Spin”, Walter and William; his sisters: Alice and Martha; his sisters-in-law: Ardyce (Ecker) Wood, Avis, Barbara and Edna Vanden Boom and his brothers-in-law Gordon Ecker and Mike King.

The funeral liturgy for Frank will be held at 11:00 am on Saturday, October 31, 2009 at ST. THERESE CATHOLIC CHURCH, Morrison St. at Wisconsin Ave., Appleton. Father William Hoffman will be officiating. Entombment will take place at Highland Memorial Park. The visitation will take place on Saturday at the church from 9:00 am until the time of mass. A memorial fund is being established in his name.

The family would like to thank Dr. Fox, Dr. Turk and the team at Appleton Medical Center for their help and support during Frank's illness.