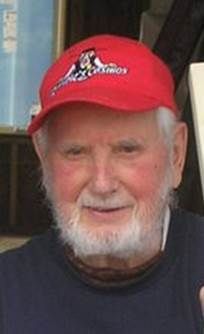 Frank J. Roovers, formerly of Kimberly, died peacefully at Bethany Home on October 8, 2015 in Waupaca, Wisconsin, at the age of 87. Frank was born on September 3, 1928, in Kimberly, Wisconsin, to Frank and Jacoba Roovers. He married his wife Dora in January, 1953 after serving in the U. S. Navy aboard the U.S.S. Yancey in the Korean War. In December of 1955 the couple welcomed twins Larry and Terry into their home. Frank spent a career of over 40 years as a papermaker with Kimberly-Clark, and Mid-Tec Corp, where he is fondly remembered by coworkers for his wit and humorous antics.

In addition to raising his sons, Frank played an integral role in nurturing his grandchildren, Ryan, Jennifer, Ben, Maggie, and Elliot. Frank is best remembered by his grandchildren for his generosity and intense devotion to their pursuits. Frank was also blessed with three great grandchildren, Carson, Catherine, and Harper.

Frank was able to spend a long retirement enjoying the outdoors in Waupaca County with his son Terry's family developing their dream home, and travelling to Knoxville to enjoy the company of his son Larry's family.
A memorial service to honor Frank's life will be held at 11:00 a.m. on Saturday October 31, 2015 at the JANSEN FARGO FUNRAL HOME, 204 East Kimberly Avenue, Kimberly, Wisconsin. The family will receive visitors at the funeral home from 10:00 a.m. until the time of services. Frank's family would like to extend its sincere appreciation to the staff at Bethany Home and Thedacare Hospice for their gentle care in dad's final days. Please make any memorials or contributions to the Parkinson's Disease Foundation in Frank's honor. Online condolences may be offered at www.wichmannfargo.com