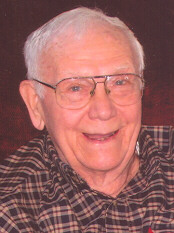 Frank, age 89, passed away at Fox River Assisted Living in Appleton on Saturday, February 27, 2010. He was born in Appleton on September 3, 1920 the son of the late Martin and Meta (Kenkel) Wiegand. In August of 1942, Frank entered into the service of his country. He was inducted into the Army, serving with the 105th Station Hospital during WWII in North Africa and Italy. He was awarded the European African Middle Eastern Theatre Service Medal as well as the Good Conduct Medal. He was honorably discharged in 1945. On August 31, 1946 he married his wife of 56 years, Clara Lawrence. In 1954, the family relocated to Appleton where he worked as an auto mechanic for Sherry Motors, Van Steen's, and Stumpf Ford, retiring in 1985. Frank enjoyed retirement with his wife, Clara, making woodworking crafts and participating in many craft shows.

The funeral service will be at 11:00 a.m. on Saturday, March 6, 2010 at the Wichmann Funeral Home, Tri-County Chapel, with Chaplain Jordan Kuczwara officiating. Friends will be received at the funeral home on Saturday from 10:00 a.m. until the time of the service. Burial will be in Riverside Cemetery, Appleton.

Frank was a loving and devoted husband, father, grandfather, and caregiver, always placing the needs of others before those of his own. He was treasured and will be missed by all who knew and loved him.

To the staff at Fox River Assisted Living, we, Frank's family, would like to say a very special thank you for offering Frank unending kindness and loving care. You cared for our Dad as though he was your very own; he couldn't have been in better hands. Your kindness will never be forgotten. Thank you. We also want to thank Frank's very dedicated primary care physician, Dr. Kristine Juntunen, and ThedaCare at Home Hospice for their supportive care during his last days.