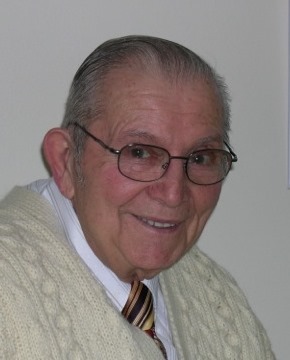 Frank Stanelle, a lifelong Neenah resident, passed away at his home on April 14, 2014, at the age of 91. Frank was born in Neenah on March 28, 1923, son of the late Frank A. and Leona (Schmidt) Stanelle. Frank displayed a penchant for music from early on, beginning with playing the drums at the age of five. By the time he was eight, he had been invited to march with the Neenah High School marching band! On June 12, 1948, Frank married Eleanore “Phoebe” Luckow in Manitowoc. Together, the couple raised six children in a love-filled and music-filled home. During World War II, Frank worked in the Manitowoc shipyards, and also studied wood-working and design for some eight years, where he learned many skills which would prove to be valuable later in life. For thirty years, he was employed by Neenah Foundry as a wood pattern-maker.

If you knew Frank you knew of his love for music. He played drums, piano, and organ; and he loved to sing. His favorite song to sing was “The Laughing Song.” He also had countless pastimes, which included camping, hunting, fishing, cribbage, golf, bowling, performing, making kites for the children in the summer time, and of course, enjoying a good Manhattan. He was good at making and model airplanes, and his only regret in life was that he never did get his pilot's license. Later in life, Frank became a Jehovah's Witness. Those that knew and loved Frank will always remember him to be fun, kind, poetic, and artistic.

All are welcome to attend a memorial service to honor Frank's wonderful life, which will be held at 11:00 AM on Saturday, April 26, 2014 at the Wichmann Funeral Home, 537 N. Superior Street in Appleton, with Chaplain Jordan Kuczwara officiating. Family and friends are invited to gather at the funeral home on Saturday morning, April 26, from 9:00 AM until the time of the memorial service. Frank will rest with his beloved Phoebe at Greenlawn Memorial Park in Neenah.

Memorial contributions may be directed to Affinity Hospice, 816 W. Winneconne Avenue, Neenah, WI 54956. Online condolences may be offered at www.wichmannfargo.com.

“A hug is the perfect gift: one size fits all, and no one minds if you exchange it.”