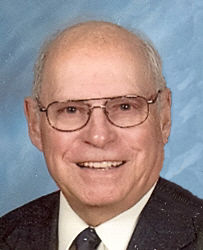 Frank was born on January 11, 1935 to Jacob and Mary (Brooks) DeJong in Freedom. He graduated from the Freedom High School in 1952 and St. Norbert College in 1956 where he excelled in football. On April 25, 1970 he was united in marriage to Joyce Gogolewski, and they spent 42 wonderful years together. Frank was an accountant for several firms until his retirement in 2002. He was a co-founder of the Freedom Athletic Association and umpired many games in the Freedom area. Frank was an avid bowler, golfer and fisherman and a Packer fan. He also enjoyed playing cards and dominos. Most of all Frank loved spending time with his family and friends at the cottage in Pound or attending his grandchildren's sporting events. He was also a volunteer at the Oconto Falls Hospital.

Frank was preceded in death by his parents, his siblings; Rosie Romenesko, Corneal DeJong, and Ardene (Ed) Welhouse, and a brother-in-law Don Hietpas.
The funeral liturgy for Frank will be held on Monday, December 17, 2012 at 11:00 AM at HOLY CROSS CATHOLIC CHURCH, 309 Desnoyer St., Kaukauna with Fr Tom Pomeroy officiating. A time of visitation will be held on Monday, December 17, 2012 from 9:00 AM until the time of the Mass. Online condolences may be expressed at www.wichmannfargo.com. The family would like to thank the paramedics and medical staff at Appleton Medical Center and all of the family and friends for their support during this difficult time.