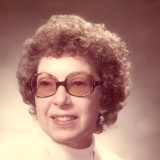 Age 82, passed away at her home on Monday, June 7, 2004. Fran was born in Appleton on June 12, 1921, daughter of the late Joseph and Anna (Bendixen) Hopfensperger. She attended Appleton High School, and graduated in 1931. She married Leo Driessen on February 16, 1946 at Sacred Hearth Catholic Church in Appleton; Leo survives. As a young woman, Fran worked in the accounting department at Kimberly Clark, but many will recall that she worked part time as a tailoring instructor at FCTI in Appleton for over twenty years. In addition to her wonderful sewing skills, Fran also enjoyed working crossword puzzles, was an avid bridge player, and was a member of the American Bridge League. She and Leo traveled extensively, and Fran always held fond memories of the couple‚Äôs trip to France. Over the years, Fran was very involved in the affairs of the church, and had donated countless hours of her time to various committees and organizations. Fran also had the reputation of making the very best homemade toffee around ‚Äì only a few were privileged to have her special recipe.

A memorial funeral liturgy for Fran will be held at 11:00 AM on Friday, June 11, 2004 at HOLY CROSS CATHOLIC CHURCH, 309 Desnoyer Street in Kaukauna with Fr. Jack Mullarkey officiating. Inurnment will be in Holy Cross Cemetery. Friends may call directly at the church on Friday from 9:00 AM until the hour of the service. A memorial fund in Fran‚Äôs name has been established.