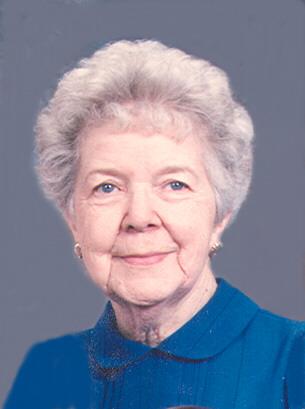 Passed away peacefully early Sunday morning at Colony Oaks Care Center, where she had been a resident since August 18. Frances was happily married for 57 years to Edward Mund, who pre-deceased her in June of 1994. She was born on May 7, 1912 in Jennings, Louisiana and grew up in Rockford, Illinois, where she met and married Edward. She was a wonderful mother to her five children, which included two sets of twins. They were transferred all over the Midwest during Edward‚Äôs career, and raised their family in Racine. Their early retirement years were spent in Monroe, Wisconsin, where they managed an assisted living apartment facility, the Monroe Manor, and leave behind many beloved friends in their years there.

In 1986, they relocated to the Appleton area to live near their daughter and her two children. Other family members have since gravitated to Appleton and adopted it as their current home. One of Frances‚Äô main goals in life was to see that her children received a good education, and she worked very diligently to support their preparation for success in whatever endeavor they chose. She sought out scholarships at universities for her children and welcomed exchange students into their home to enrich their development and career aspirations. Early memories include large family dinners that regularly brought together friends, business and educational associates to enliven the spirit of conversation and teach us the value of learning to communicate with people from diverse backgrounds. She also cared for her mother-in-law in her home for many years.

Survivors include her eldest son, George Edward Mund of Appleton, her first set of twins; Gerald Alan Mund, also of Appleton, and Judith Ann Yahr (Jim Hrubecky), Appleton. Her second set of twins; Thomas Charles Mund (Patty) who is employed with the state and resides in Madison, and Timothy John Mund (Wendy) who teaches and lives in Shanghai, China. She is further survived by four grandchildren: Susan Frances Yahr (fianc√© David Schulz) of Appleton, Carrie Schumacher (Cal), Appleton; Charles Mund (Jennifer) of Jacksonville, Florida and Ben Mund of Madison. Frances also has four great-grandchildren. Another grand-daughter, George‚Äôs daughter, Stephanie Mund, was killed in a motor vehicle accident in 1993 at the age of 15.

Frances has been a member of St. John United Church of Christ on Marquette Street in Appleton for the past 20 years. Her memorial service will be held on Friday, November 17, 2006 at 4:00 P.M. with the Rev. Tom Fritz officiating. She was active in her support of the Salvation Army and St. Vincent de Paul. Contributions to other favorite charities of Frances and Edward‚Äôs should go to St. Joseph‚Äôs Food Pantry and Leaven and may be made in her name.