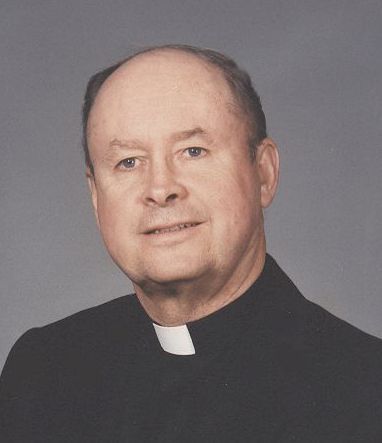 Father Robert Vandenberg was born on February 4, 1926 in Kimberly, Wisconsin, to Gregory and Marie (Lamers) Vandenberg. He attended Kimberly High School and Marquette University in Milwaukee where he earned a Bachelor's degree in Naval Science and a Bachelor's degree in Business Administration. Father Vandenberg held a commission in the U.S. Navy Reserves until 1951. From 1952 until 1954, Fr. Vandenberg spent time as a novice with the Jesuit Fathers. Following this, he entered St. Paul Seminary in St. Paul, Minnesota, to study theology. He was ordained a priest by Bishop Stanislaus V. Bona on May 31, 1958, at St. Francis Xavier Cathedral in Green Bay.

Father Vandenberg served as assistant pastor at St. Therese Parish in Appleton in 1958, at St. Peter Church in Oconto from 1967 until 1968, and at St. Patrick Parish in Green Bay from 1968 to 1969. He also served one year as pastor at Immaculate Conception Church in Glenmore. In 1970, Father Vandenberg became pastor of St. Paul Parish in Combined Locks, where he served until his retirement in 2004. Prior to his retirement, he was appointed temporary administrator at Holy Angels Parish in Darboy.

Fr. Vandenberg served on the board of directors of the Leo Benevolent Society from 1969 until 2007. For most of those years, Father served as the Treasurer, oversaw the investment portfolio of the funds, and ensured that retirees received their pension benefits. Following his retirement, he assisted many area parishes with weekend masses, and also anointed the sick and held a weekly mass at St. Elizabeth Hospital.

Fr. Vandenberg will be remembered by all for his love of fly-fishing, hunting, traveling, playing cards, and his “mandatory” weekly visits to Van Abel's of Hollandtown for the pan-fried pike. In recent years, he came to love and appreciate his Kimberly neighbors, who were all very good to him and looked after his needs. He had a special affection for Dave and Dawn Krajeuwski and their children.

Reception of the body by the Regional Vicar, Very Reverend Donald Zuleger, will take place at St. Paul Parish, 410 Wallace Street in Combined Locks, on Sunday, February 1, 2015, at 1:00 PM, and will continue until the time of a prayer service which will be held at 4:00 PM. Visitation will resume Monday morning at the church from 9:00 AM until 11:00 AM, at which time the Funeral Liturgy, expressing our faith and our hope in the promised glory of the Lord's Resurrection, will take place. Bishop David L. Ricken will be the Celebrant, with Bishop Robert Banks and Bishop Robert Morneau Concelebrating. Reverend Monsignor James Vanden Hogen will be the Homilist. Burial will follow at the parish cemetery, with full military honors.

Memories of Fr. Vandenberg and online condolences may be shared at www.wichmannfargo.com.