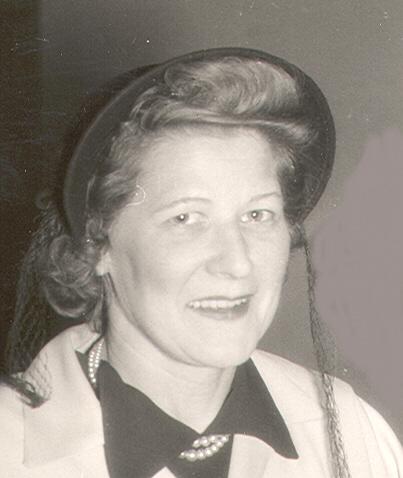 Florence Meyers Jegen
Florence Jegen, 99, passed away peacefully on July 31st 2007 in her apartment at the Appleton Retirement Community. She was born in Chicago, IL on July 23rd 1908, the
daughter of Swedish immigrants. She resided in Chicago, IL, New York, NY, Oxford, MS,
Clearwater, FL, Houston, TX and Appleton, WI. Florence lived through WWI, WWII, The
Great Depression, Prohibition, Women's Suffrage, The Roaring 20's, and was a force to be reckoned with. Florence was an extremely funny and creative person who always had a
way to make people laugh. She had three children, four grandchildren and five great¬¨
grandchildren. She was a gifted and tireless seamstress, designing many of her own creations, and her specialty in the kitchen was a lemon meringue pie against which few could
stand in comparison. She enjoyed hearing her husband play the piano and singing with her
daughters Joanne and Carol.
She was a teletype operator for Western Union and Mitsubishi Inc., and occasionally a swimsuit model for Jansen swimwear. She was active in the PT A, and League of Women Voters, American Red Cross and was an avid, lifelong bowler, winning many tournaments.

She was preceded in death by her parents: Nils Peter Meyers and Hilda Johnson Meyers, and by her brothers Frank, Harry, Edwin and Steven Meyers and sister Lillian Meyers Bergstrom, and by her first husband William Dudley, and her second husband John O'Brien Jegen. She is survived by her son William Dudley and his wife Marilyn of Tuscon, AZ; their daughter Karen Dudley Jones and her husband Joel Jones, and their daughters: Jaclyn and Kimberly. She is further survived by her daughter Joanne Jegen Wilton and her husband Donald Wilton of Houston TX, and by their children Sandra Wilton of Tallahassee FL; John Wilton and his wife Cristin and their children Sean and Ryan of Aurora, CO; and by their son David Wilton-Green, his wife: Amanda Wilton-Green, and their daughter Hazel. She is further survived by her daughter Carol Jegen and her husband Frank Rippl, of Appleton, WI.
As per her wishes, Florence's body, was donated to the University of Wisconsin Medical School. A family memorial gathering will be held at a future date. Any memorial contributions may be directed to the White Heron Chorale, Appleton Memorial Park and Arboretum, or the charity of your choice.
The family wishes to thank the outstanding, loving and caring staff of the Appleton Retirement Community (formerly know as The Angelus Retirement Community) and the hospice and homecare workers of Heartland.