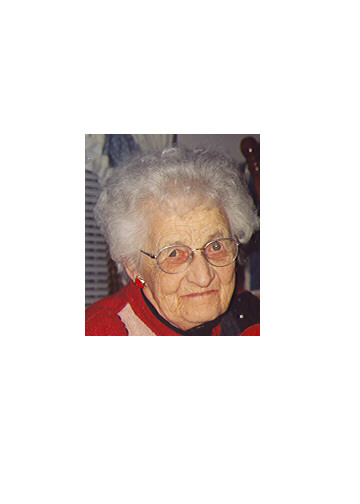 Age 91, passed away peacefully, surrounded by her loving family on Saturday, February 12, 2005. Florence was born July 4, 1913 at Holy Family Hospital in Manitowoc, daughter of the late Joseph and Martha (Kiliansky) Heinrichs. She was a 1930 graduate of Manitowoc Lincoln High School, then worked at Aluminum Goods Mfg. for five years. Florence married Howard Scheuer on September 24, 1935; he preceded her in death June 18, 2004 after sixty-eight years of marriage. Later, Florence worked for S. S. Kresge Company in Manitowoc and was in charge of the candy department until the family relocated to Appleton in 1942. She enjoyed golfing, bowling, playing cards, and traveling with Howard in their travel trailer. She was a longtime and faithful member of St. Pius X Catholic Church and of the Teamsters Retirees' Local #563.

Florence is survived by a son: Ken (Kay) Scheuer of Appleton; three granddaughters: Kelly (Mike) McCoy of Appleton and their daughters Mallory and Kourtnie; Jill (Joel) Kable of Kaukauna and their daughters Megan and Molly; and Wendy (Jim) Hansen of Neenah and their sons Colin and Benjamin; two sisters: Ruth Witczak of Manitowoc and Irene Lalko of Two Rivers; a sister-in-law: Emily Heinrichs of Manitowoc; as well as many nieces, nephews, friends, and neighbors. She was preceded in death by her parents, her husband in 2004, a daughter Diane in 1997, a brother Raymond Heinrichs; a sister-in-law: Evelyn Heinrichs; two brothers-in-law: Joseph Witczak and Jule Lalko.

The funeral liturgy for Florence will be held at 11:30 AM on Wednesday February 16, 2005 at ST. PIUS X CATHOLIC CHURCH, 500 W. Marquette Street in Appleton with Fr. Donald Zuleger officiating. Interment will follow at St. Joseph Cemetery. Friends may call directly at the church on Wednesday from 9:30 AM until the hour of the service. The family has established a memorial fund in Florence's name.

The family would like to extend their thanks to the entire staff at Franciscan Care Center. Florence felt so much at home while in your care; your kindness will never be forgotten.