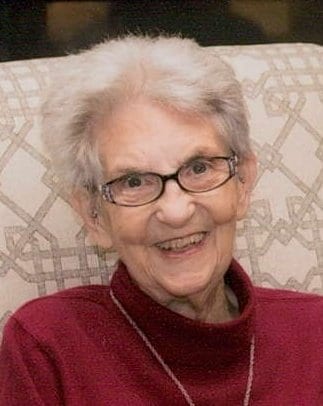 Ferill Rice
July 4, 1926 - April 10, 2020
Print
Email
Service
Ferill's service can be viewed here at 11:00 AM on Thursday, April 16 and will be uploaded once complete
Location Not Available
Cemetery
Riverside Cemetery, Appleton
Appleton, WI

Born in Hemingford, Nebraska, on July 4, 1926, to Derrick Dalton and Helen Agnes (Moffatt) Dalton, Ferill Jeane was the oldest of three children.  Her father was a WWI veteran.

Ferill Jeane graduated high school in Alliance, Nebraska, in 1943.  She went to work for the Federal Public Housing Authority at the Alliance Army Air Base where she remained until the summer of 1945.  Subsequently, she moved to Neosho, Missouri, where she was employed by the U.S. Army to do payroll for returning servicemen at Camp Crowder.  On March 7, 1946, she married returning G.I. LaVerne Rice.  The couple resided in Tabor, Iowa until they moved to Wisconsin in 1966 settling in the Appleton, Wisconsin area in 1967.

Ferill Jeane led an interesting and eventful life.  She did the bookwork and picked up and delivered supplies for the family electrical business.  She was active in church teaching Sunday School classes, directing the youth and adult choirs.  Ferill Jeane actively supported DeMolay and Rainbow.  She was a certified teacher in antiques and taught at Fox Valley Technical School for several years.  She contributed articles to numerous antiques publications.  In 1977, she and LaVerne formed Fenton Art Glass Collectors of America of which she was a permanent board member.  She edited and illustrated Caught in the Butterfly Net.

Ferill Jeane was a majority member and Past Honored Queen of Bethal #3 Job’s Daughters; a 50 Plus member and Past Worthy Matron of The Order of Eastern Star with membership in both Glenwood, Iowa and Appleton, Wisconsin.  Additionally, she was active in the Federated Woman’s Club in Iowa serving in many positions including Education Chairperson for the State of Iowa.  Memberships included the General Society of Mayflower Descendants, The Pilgrim John Howland Society, Daughters of the American Revolution.  She was an adult member and past troop leader of the Girl Scouts of America.

The family wishes to thank the staff of Century Oaks Assisted Living for their love and support.

The funeral service for Ferill Rice will be livestreamed on Thursday, April 16, 2020 at 11:00 AM at www.wichmannfargo.com.  Online condolences may also be expressed on the website.