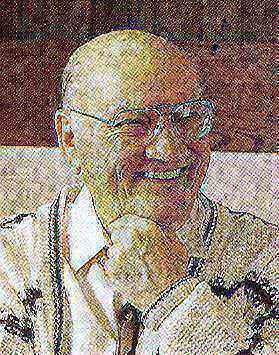 F. John Barlow, son of the late Ernest A. and Alice (Norton) Barlow, passed away at his home on June 5, 2004. John was born July 12, 1914 in Milwaukee, Wisconsin. He graduated from Washington High School in 1932, where he was the All-City Fullback for the undefeated football team. After attending St. John‚Äôs Military Academy for a year, he enrolled in the Mechanical Engineering program at the University of Wisconsin-Madison. He received his B.S. in 1937 and was selected as Saint Patrick, the outstanding engineering student in his class. There he also was a member of the Wisconsin Badger football team and president of Sigma Chi fraternity. While in Madison, John married his high-school sweetheart, Dorothy M. Marx, on October 13, 1935. She preceded him in death in January of 1994.

John worked for Buffalo Forge Co. and then A.O. Smith Co. until 1944, at which time he moved to Appleton with Western Condensing, the only company in the United States providing the means to grow Penicillin for the war effort. In 1949, with five thousand dollars and a pick-up truck, he started AZCO Inc. as an industrial piping contractor. He succeeded in developing AZCO into one of the countries major contractors specializing in industrial and power plants (including nuclear) construction and pipe fabrication. In 1998 he sold AZCO to its employees so he could direct all his time to his mineral collection and philanthropic work.

Collecting was a passion for John. He assembled one of the best and largest privately held mineral collections in the world. He won many awards in the field, including the highest honor, the 2000 Carnegie Award for Lifetime Achievement, from the Carnegie Museum of Natural History. He has also been awarded the Gold and Silver medals from the Smithsonian for a very large donation of rare and valuable Indian jewels and jewelry. One of his proudest accomplishments was publishing the impressive book‚Äù The F. John Barlow Mineral Collection‚Äù in 1996, which documents and pictures the collection he built.

John was an avid hunter and traveled the world in pursuit of a challenge. He hunted in Africa, India, Mexico, British Columbia and even the Artic. In 1966 he became an exclusive member of the Grand Slam Club ‚ÄúThe North American Sheep Hunters‚Äô Association‚Äù. He is the 46th member and the first from Wisconsin to have achieved this. In 1970, John represented Wisconsin along with Governor Knowles in the One Shot Antelope Hunt-an event that they won.

In 1964 John received his pilot‚Äôs license at the age of 50 and bought his first plane, which he flew for both business and pleasure. He had many wonderful trips flying with Dorothy, including their favorite trips to Mexico, where they both enjoyed deep-sea fishing together.

John was a very creative entrepreneur, starting many projects here in Appleton. He was a founding member of Air Wisconsin. He was instrumental in bringing cable television to the Valley in the early 1980‚Äôs. He brought the first Mexican food to the area with Tippy‚Äôs Taco House. During the 1970‚Äôs and 1980‚Äôs he was president and owner of Schlafer Supply Co. Inc. He worked with former Mayor Dorothy Johnson in getting the Avenue Mall built. He also founded the Valley‚Äôs premier jewelry store, Earth Resources, which he sold to his daughter Alice in 1995.

In support of the community he loved, John gave both his time and his means. For example, he provided an educational mineral exhibit to the Children‚Äôs Museum. John also gifted a very unique Perthshire Glass Paperweight collection to the Bergstrom-Mahler Museum. He is probably best known for the Barlow Planetarium at UW Fox Valley, which is dedicated in honor of his wife

Dorothy. Most recently, he provided a large and important collection of minerals to the Weis Earth Science Museum. He also supported numerous other community organizations in meaningful ways.

John was a member of numerous organizations including the Mechanical Contractors Association of Wisconsin and the Mechanical Contractors Association of America for which he served as president in 1974. During that year President Gerald Ford appointed him to The Summit Conference on Inflation. In 1983 John received the Distinguished Service Award from MCAA, where he was introduced as the ‚Äúuncommon man‚Äù. He was a long time member and two-term president of Butte des Morts Country Club, a past Exalted Ruler of the Appleton Elks Club, director of First National Bank (now Bank One), and a member of the Downtown Appleton Rotary Club and a Paul Harris Fellow. He was a member of All Saints Episcopal Church and served as Senior Warden.

In 1994 John was awarded an honorary Doctorate of Science from UW-Oshkosh, which was presented by Governor Tommy Thompson. For his contributions to education in geology, he also received The Chancellor‚Äôs Medallion from UW-Oshkosh.

A Memorial Service will be held at All Saints Episcopal Church (100 N. Drew St.) Appleton on July 10, 2004 at 11:00 AM with Reverend Patrick Twomey officiating. Visitation will be from 9:00 AM until the time of services at the church. In lieu of flowers, contributions in his memory can be sent to the Community Foundation (P.O. Box 563 Appleton, WI 54912), Theda Care at Home Hospice (201 E. Bell St. Neenah, WI 54956) or the charity of your choice.

The family would like to extend their thanks to Dr. Lee Vogel and Dr.‚Äôs John and Doug Mielke for their exceptional care and to the devoted caregivers from Home Instead.