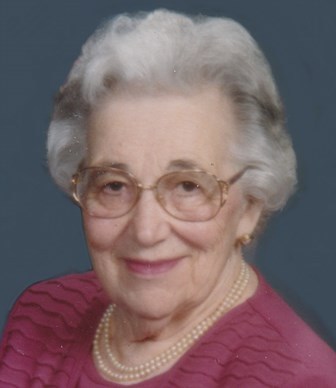 Evelyn Blick, age 94, passed away peacefully at Brewster Village on Wednesday evening, March 12, 2014. Evelyn was born in Wrightstown on July 10, 1919, daughter of the late Edward and Barbara (Buechel) Meulemans. At the tender age of sixteen, Evelyn graduated as valedictorian of the Wrightstown High School, and went on to attend Business College in Appleton for the next two years. On May 13 of 1944, she married John R. Blick. Together the couple raised six children and enjoyed many wonderful years together until the time of John's death in 1997. The family were longtime and faithful members of St. Therese Catholic Church in Appleton, where Evelyn was very active. She served as a Eucharistic minister and was a member of both Catholic Daughters and Christian Ladies. She was an avid reader. So much so, that she volunteered to help reading students at Franklin Elementary and Catholic Central Schools. Later in life, when she resided at the Appleton Retirement Community, she served as their own in-house librarian, and read daily to those who were no longer able to read themselves. Everyone will remember her as a master homemaker. In addition to raising her family, she sewed, knitted, gardened, and kept a loving home. Her specialty recipe was Schaum Torte; a favorite of everyone who attended German Fest at St. Therese.

Evelyn loved her family so; they meant the world to her and will now sadly miss her. They include her six children: Cheryl Pegel of Appleton; Barbara Pope of Chicago; Margaret (Brooks) McBurney of Hagerstown, Maryland; Marilyn (Daniel) Kopetsky of New Berlin; Jon (Barbara) Blick of Milwaukee; and Mary Pat (Daniel) Kuen of Appleton. Evelyn treasured each of her grandchildren: Marianne Pegel; Edward, Michael, and Jessica Pope; Douglas McBurney; Megan (Jared) Roberts; David (Brea) Kopetsky; Sarah and Matthew Kopetsky; Sam and Eleanor Blick; and Alex and Ryan Kuen. There are also five great-grandchildren: Brittany Bargenquast; Harrison and Audrey Roberts; and Liam and Soren Kopetsky. Evelyn was preceded in death by her parents, her husband in 1997, a grandson Joseph Pegel, six sisters, and two brothers.

The funeral liturgy for Evelyn will be held at 11:00 AM on Monday, March 17, 2014 at ST. THERESE CATHOLIC CHURCH, at the corner of Morrison Street and Wisconsin Avenue in Appleton. Fr. William Hoffman will officiate, and interment will take place at a later date at Highland Memorial Park. Family and friends are invited to gather from 2:00 PM until 5:00 PM Sunday at the Wichmann Funeral Home, 537 N. Superior Street in Appleton, and again at the church on Monday morning from 10:00 AM until the time of the service. Online condolences may be offered at www.wichmannfargo.com.

In lieu of flowers, the family suggests that contributions be directed to:

The family would like to offer their sincere thanks to the many caregivers at the Appleton Retirement Community as well as the wonderful staff at Brewster Village. You cared for our mother as though she was your very own, and for that we will always remember each of you.