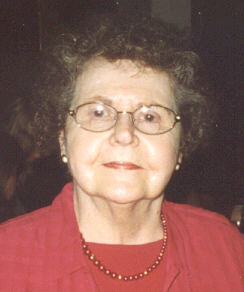 Age 83, passed away unexpectedly at home in Kimberly on Friday, July 13, 2007. She was born in Appleton on September 17, 1923 the daughter of the late Anton and Mary (Pleier) Dessort. On July 18, 1942 she married her former husband, John Van Eperen. Evie was a long time resident of Kimberly. Evie will be remembered for her love of traveling and camping in Eagle River, spending time at the cabin in Crystal Falls, MI, and holidays with her family. Her childhood friends and friends from work were cherished. Evie‚Äôs grandchildren and great-grandchild were very special to her.

The funeral service will be at 7:00 p.m. on Tuesday, July 17, 2007 at the Jansen Fargo Funeral Home, Kimberly with Deacon Vincent DeGroot officiating. Friends will be received at the funeral home on Tuesday from 4:00 p.m. until the time of the service.

A memorial fund in Evie‚Äôs name is being established. Proceeds will be given to Diabetes research in memory of her son, Rick.

‚ÄúMom, we know how much you missed Tommy, Jack and Rick, and that you are with them now in Heaven. We love you and will miss you.‚Äù Judie, Mary and Barb.