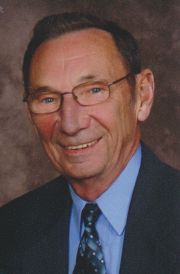 Evan Cecil Carpenter, age 76, of Appleton, finished his last lap and took the checkered flag on April 9, 2016 surrounded by his loving family.

Evan was born at home on the family farm in the Town of Maine, Outagamie County on April 12, 1939 to Cecil and Evelyn (Conlon) Carpenter. He graduated from Clintonville High School, Class of 1957. Evan met the Love of his life Bonnie at the Caroline Ballroom. On June 5, 1960, Evan married his dancing sweetheart Bonnie Jean Radtke at St. John's Lutheran Church in Marion, Wisconsin. After they married, the happy couple made their home in Appleton, recently celebrating 55 years of a wonderful life together.
Evan was a self-taught heavy equipment mechanic at Superior Electric Co. (Michels Power) where he thoroughly enjoyed working for 37 years, retiring in 2004. His co-workers became lifelong friends who Evan enjoyed meeting for the retirees monthly breakfast.

Evan and Bonnie enjoyed their countless memories of good times with their many dear friends and family; especially LeRoy & Dar, Monte & Sal, Lynn & Dale, Phyliss & Don and Bill & Sandy. They also shared many laughs with the friendly staff and company while enjoying Brandy Old-Fashioneds and perch at Dick & Joan's Supper Club. Bonnie and Evan enjoyed dancing the Polish Hop to Polka music. They could be found dancing circles around everyone at the Cinderella or Caroline Ballrooms every Saturday night for many years.

Evan began his racing career in the 1960s on dirt tracks throughout Northeastern Wisconsin, including the half mile dirt track of KK Sports Arena (WIR). His second racing career took off in the 1980's and continued through 2008. As crew chief for his sons, Doug and Dan, he was a constant fixture in the pits at WIR ensuring the 88 and 28 cars were always race ready. He was awarded the honor of being a Lifetime Member of the Fox River Racing Club for his years of service to the club.

Evan was a devoted father who was involved with all of the boys' events, especially baseball. He loved watching the boys grow up on the baseball diamond, from coaching tee ball to attending every possible Little League, Babe Ruth, High School and Legion baseball game. He particularly enjoyed driving the Legion team bus, “Ole Blue”. His fatherly devotion continued with the grandkids. Wherever one of the gang had an event (dance, sports, music) you would find Grandpa and Grandma. In between the family's many activities, Evan and Bonnie loved to travel. In 2007 they vacationed to Alaska, completing a visit to each and every one of the 50 states along with Canada and Mexico.

The funeral service for Evan will be held on Thursday, April 14, 2016 at 11:00 a.m. at ZION LUTHERAN CHURCH, 912 N. Oneida Street, Appleton. Visitation will take place on Wednesday, April 13, 2016 starting at 4:00 p.m. until 7:00 p.m. at Wichmann Funeral Home, 537 N. Superior Street, Appleton. Visitation will continue on Thursday at 9:00 a.m. until the time of the service at Church with Pastor Roger McQuistion officiating. Interment will take place at Riverside Cemetery in Appleton. In lieu of flowers a memorial fund has been established in Evan's name. Online condolences can be offered at www.wichmannfargo.com.

The family would like to thank all of those who provided the outstanding care he received, including Dr. Yao and the staff at Fox Valley Hematology and Oncology; the entire staff at Appleton Retirement Community, especially the girls that became part of Evan's family, and ThedaCare at Home Hospice. We would especially like to thank all of the visitors and many friends for all of their thoughts and prayers during this challenging time. We love you Dad, Godspeed!