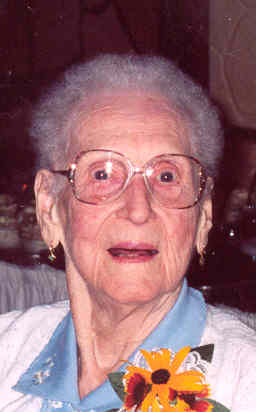 Age 93, died Monday morning, July 7, 2003. She was born July 31, 1909, to the late Frank and Lucy (Spears) Wiegand, in Appleton, where she was a resident all of her life. Eunice had been employed by Lakeview Mill for 28 years. She loved her flowers, crocheting and baking. Eunice was a member of St. Joseph Catholic Church. Survivors include three children, Robert Robinson, Appleton; Beverly Lyon, Appleton; Joan (Clyde) Schumacher, Kimberly; eight grandchildren, Tom (Linda) Lyon, Greenville; Jeff (Karen) Lyon, Milwaukee; Peggy (Chuck) Reetz, Appleton; Lisa Jansen, Appleton; Mark Schumacher and his friend, Wendy, Freedom; Lynn (Barry) Drews, Michigan; Tim (Colleen) Schumacher, Sherwood; Steve (Ann) Schumacher, Stockbridge; 11 great grandchildren; Stephanie and Tim Lyon, Jennifer and Jackie Lyon, Brooke and Laura Jansen, Chris and Brad Schumacher, Dana Schumacher, Bailey and Taylor Drews: a sister-in-law, Evie Wiegand Herm, Scottsdale, AZ. She was preceded in death by her husband, McKinley Robinson, May 1983, six sisters and one brother. The funeral liturgy for Eunice will be held at 10:30 am, Wednesday, July 9, 2003, at ST. JOSEPH CATHOLIC CHURCH, 410 West Lawrence Street, with Father Ken Reinhart officiating. Burial will be in Appleton Highland Memorial Park. Friends may call at the church from 9:30 am, Wednesday, until the time of the mass. A memorial fund is being established.