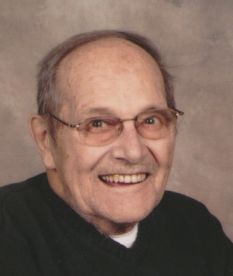 Eugene J. “Gene” Hoolihan, 88, of Appleton, passed away on Friday, August 23, 2013. Gene was born on March 31, 1925 to Maurice and Lucille (Goeser) Hoolihan. He was a veteran having served in the US Navy during WWII. On November 17, 1945 he was united in marriage to LaVergn Welson in Appleton. Gene worked for over 25 years at Kool Brothers as a welder and later a foreman. He was an avid Packer fan and enjoyed bowling, fishing and especially John Wayne movies. Gene was Irish and loved Irish music and singing and he had a wonderful sense of humor. Most of all he loved his family and the time they spent together will always be cherished.
Gene is survived by his daughters: Connie (Gus) Lindvig of Neillsville, Debbie (Steve) Olson of Appleton, and Cindy (Ed) Cipollina of Georgia; 14 grandchildren; Sean (Brittany), Brady (Krista), Brianna, Tina (Noel), Heidi, Gus E. (Sara), Bryan (Kimberly), Tim (Debecca), Kayla (Jon), Nick (Amanda), Christian, Derek, Reagan, and Shannon, 17 great grandchildren; one great great granddaughter, one brother: Roger (Gloria) Hoolihan a sister Patricia Schultz, and other relatives and friends.
Gene was preceded in death by his parents, his wife LaVergn, a son Lawrence “Larry”, one brother, Robert Hoolihan, and a sister-in-law, Shirley Cook.
The funeral liturgy will be held on Wednesday, August 28, 2013 at 11:30 AM at SACRED HEART CATHOLIC CHURCH, 222 E. Fremont St. A visitation will be held on Tuesday, August 27, 2013 from 4:00 until 8:00 PM at the Wichmann Funeral Home and on Wednesday from 10:00 AM until the time of the mass at the church. Interment will be in the St. Joseph Catholic Cemetery.