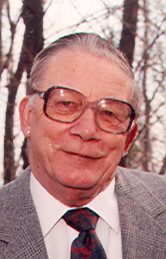 Eugene Fredrick Lange, age 85, passed away on Wednesday, August 19, 2009. He was born on April 30, 1924, the son of the late, Victor and Bessie (Paschen) Lange. After graduating from Kaukauna High School in 1942, Gene attended the University of Wisconsin at Madison before entering the Navy in 1943. Gene served his country honorably during World War II until 1946. In 1950, he graduated from the University of Madison with a Bachelor of Science in Pharmacy. He then married his loving wife, Ruth Borcherdt on October 21, 1950. Gene began his career as a Pharmacist working for Look Drug store. He then took ownership of Little Chute Pharmacy for approximately 14 years. Gene then worked for Appleton Medical Center where he retired in 1991. Gene loved being a pharmacist and took pride in helping others. He enjoyed being on vacation with his family, dancing, singing and wood working. Gene was fond of playing cribbage and was a kind, gentle and loving man to his wife, children and all he knew.

A Memorial Service for Gene will be held at 6:00 p.m. on Friday, August 21, 2009, at the WICHMANN FUNERAL HOME, with the Rev. Dick Schaefer officiating. Friends will be received at the funeral home from 4:00 p.m. until the time of service.

In lieu of flowers, a memorial fund in Gene's memory has been established.