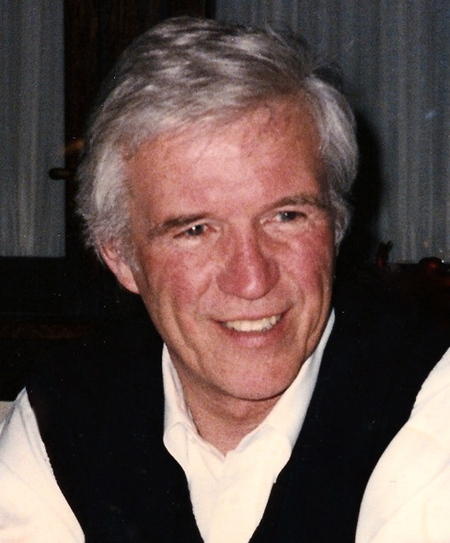 Eugene “Cab” Callaway, age 89, loving husband, father, and grandfather, passed away peacefully on Wednesday, June 27, 2012 at his home, after a short, but brave battle with Leukemia. Cab was born on November 11, 1922 in McKeesport, Pennsylvania, son of the late William and Ruth (Meerhoff) Callaway. Cab and his family moved to Neenah when he was 4.

He attended Neenah High School and graduated in 1941. Cab lettered in four sports, football, basketball, track and field, and boxing, and was named the Captain of the football team by his teammates and also competed at the Wisconsin State Track Championships in the high jump. As a lifeguard, Cab worked the charter summer at the new Neenah pool, and in the summer of 1942, met the love of his life, Phyllis, at the old stone quary just outside Appleton.

In World War II, Cab proudly served his country in the United States Navy as Petty Officer First Class. He was stationed in the Aleutian Islands. On November 29, 1943, he was married to Phyllis Luebke on Widbey Island, Washington.

After the war, Cab went to work for Appleton Pattern Works as an apprentice. He then achieved Journeyman status as a Pattern Maker from the Industrial Commission of Wisconsin. In 1960, after seventeen years of employment, he became the owner and President of Appleton Pattern Works, retiring in 2000. Cab's pattern for a tree grate is currently in the Smithsonian Museum and graces the boulevards, parkways, and sidewalks of major cities from Los Angeles to Paris, France.

As a member of Appleton's Trinity Lutheran Church, Cab served on the Church Council and was a Sunday School teacher for 13 years. Cab was an avid golfer, and was past president and club champion of the Riverview Country Club. He also served on the board of the YMCA from 1969-1972 as well as Chairman of the Personnel Committee.

Cab loved spending summers in Door County with his family. He enjoyed boating, fishing, going to the ballet, the theater, and cheering on the Packers. In his retirement, Cab mastered chair caning, building model WWII planes, building a boat with his grandson in Connecticut, and remodeling his son's homes in Illinois. He and Phyllis took several trips to Europe with their children, but his greatest joy in life was watching his children and grandchildren participate in school activities, music performances, stage, television, and film productions, and sporting events.

The funeral service for Cab will be held at 3:00 p.m. on Sunday, July 8, 2012 at FIRST UNITED METHODIST CHURCH, 325 East Franklin St., Appleton, with Rev. Dr. Doyle Blanton and Rev. Carol Hackbardt officiating. Friends may call on Sunday at church from noon until the time of the service. Entombment will take place at 9:00 a.m. on Monday, July 9, 2012, at Highland Memorial Park, Appleton. Memorial contributions in Cab's name may be made to ThedaCare At Home Hospice, First United Methodist Church, or the Calvery United Methodist Church, Egg Harbor, WI. The family would like to extend a sincere thank you to Dr. Charles McKee and his wife, Leslie, Rev. Carol Hackbardt, and many special friends for their care, compassion, and support.