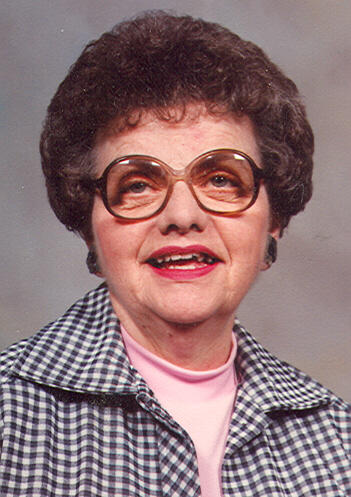 Age 87, passed away at St. Elizabeth Hospital on Monday, November 8, 2010. She was born in Appleton on November 5, 1923 the daughter of the late Adolph and Emilie (Hickmann) Mueller. On June 14, 1947 she married her husband of 40 years, Edgar A. Leisering. He preceded her in death in 1988. Before her marriage, Esther was a clerk at Gloudeman's and Prange's. As a life-long member of Zion Lutheran Church she was active in Keenagers, T.H.E.O., and other church activities including singing in the choir. Esther and Eddie enjoyed spending time at their cottage on Pelican Lake and attending Packers games.

Esther is survived by her sister-in-law: Marion Leisering; brother-in-law, Kenneth Sager; nieces: Kris Sager and Ann Sager; cousins: Mary Kay Smith, James Arps and family, and Stephen Arps and family. She will be missed by her many good friends, especially: Gerry Fiebelkorn, and Barb and Tom Witt and family. She was preceded in death by her sister, Alma, and brothers: Ernest, Reinholt and Robert, all who died in Germany before Esther's birth.

The funeral service will be at 11:00 a.m. on Thursday, November 11, 2010 at ZION LUTHERAN CHURCH, 912 N. Oneida St., Appleton, with Rev. Kurt Kovanen officiating. Friends will be received at the church on Thursday from 10:00 a.m. until the time of the service. Burial will be in Appleton Highland Memorial Park.

A memorial fund in Esther's name is being established.