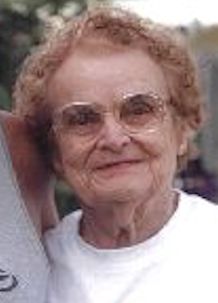 Was called to Heaven on July 10, 2018 at the age of 99 ½ years. Esther passed away peacefully at Manor Care Nursing Home in Appleton, WI after a brief illness. Esther was born on December 7, 1918 in Dundas, WI to Mike and Bertha (Van Bockel) Driessen. Esther was joined in marriage to Quinten DeBruin on February 19, 1947 at St. Francis Catholic Church in Hollandtown.

Visitation will be held at Wichmann Funeral Homes-Tri County Chapel, 1592 S. Oneida Street, on Monday July 16th from 11:00 AM to 1:00 PM. Funeral services at 1:00 PM with Deacon Gib Schmidt officiating. Interment at Holy Cross Cemetery. In lieu of flowers, a memorial in Esther’s name will be established. Esther’s family would like to extend a heartfelt thank you to the staff of Manor Care, especially Mary P. and the staff at Heartland.