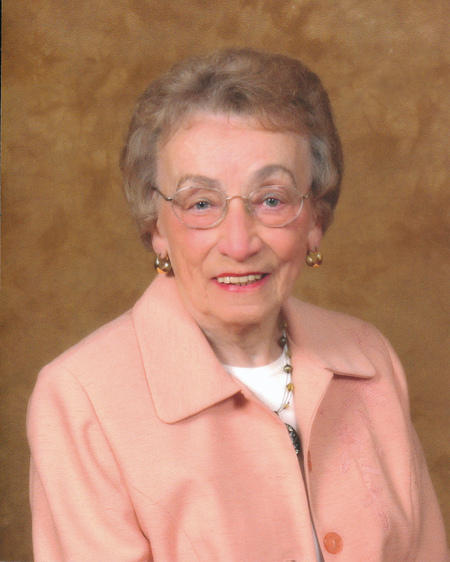 Esther L. Berg, of Appleton, passed away on Saturday, September 21, 2013 at Appleton Medical Center at the age of 91 years, 11 months, and 9 days. She was born on October 12, 1921 on a farm near Soldier, Iowa, the youngest daughter of the late Fritz and Anna (Peterson) Thies. Esther attended schools in the Soldier-Ute area. She was baptized and confirmed in the Lutheran faith at St. Paul's Church in Ute, Iowa.
Esther married Orvan Berg on May 29, 1942 in Nebraska. Together they raised four daughters on a farm near Soldier. They moved their family to Crivitz, Wisconsin in 1958. They were members of Grace Lutheran Church in Crivitz for 32 years. Esther was employed by Witt's I.G.A. Store and by Thompson Ski Company for 25 years, until her retirement in 1984. In 1992, they moved to Appleton and joined Faith Lutheran Church. She faithfully attended the Senior Bible Class, enjoyed her church quilting groups, and volunteered for many years at Bethesda Thrift Store. Esther was an excellent cook and gardener. She loved baking, especially pies, and tending to her flowers.

On her 80th birthday, Esther was asked what advice she might give, and she quickly responded, “You have to have a sense of humor.” She loved life, her family, friends, garden of flowers, but most of all she loved her Lord and Savior, Jesus Christ. Her favorite Bible verse was Psalm 118, vs. 24, “This is the day that the Lord hath made. We will rejoice and be glad in it.”

The funeral service for Esther will be held at 11:00 am on Thursday, September 26, 2013 at Faith Lutheran Church, 601 E. Glendale Avenue, Appleton. Rev. Daniel Thews will be officiating. Entombment will take place at Highland Memorial Park, Appleton. A visitation will be held at the church from 9:30 am until the time of service. Online condolences can be offered at www.wichmannfargo.com.

A special thank you to the staff on the Eighth Floor of Appleton Medical Center, and ThedaCare at Home Hospice for their kind and wonderful care.